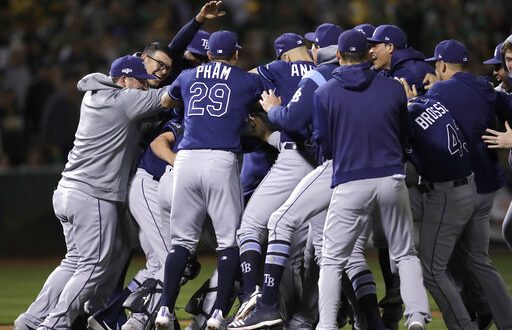 No money, no problem.

The Tampa Bay Rays used four home runs to down the Oakland Athletics 5-1 in the AL wild-card game Wednesday night.

The Rays, who have the lowest payroll in the MLB, move on to face the Houston Astros in the divisional round beginning Friday.

Infielder Yandy Diaz had not played a game of baseball in two months due to a foot injury. Despite that, he led off for the Rays and went yard on the fifth pitch of the game.

Oakland responded by loading the bases in the bottom of the first, but could not score. The Rays did not waste time building on their lead, as Avisail Garcia homered in the second inning which scored Matt Duffy from first and put the Rays up 3-0.

In the third, Diaz homered again to give the Rays a 4-run lead and force Oakland pitcher Sean Manaea from the game. Manaea was awarded the playoff start after a stellar September in which he sported a 1.21 ERA. He allowed three home runs in all his starts last month. He allowed three last night.

The A’s would get one back in the bottom of the third, though. A Ramon Laureano sacrifice fly scored Marcus Semien, who had reached third on an error.

Tommy Pham’s homer for the Rays in the fifth inning gave the team its fifth run and rounded out the scoring on the evening. After Charlie Morton started the game, Tampa Bay used three relievers over the final four innings who stymied the Oakland offense.

Morton earned the win after giving up five hits and striking out four over five innings. Rays manager Kevin Cash had this to say about Morton’s solid performance:

What This Means For Both Teams

This game adds to Oakland’s playoff struggles. They were eliminated in this round last season when they got hammered by the Yankees 7-2. Oakland has not won a winner-take-all game since 1973; they have lost their last nine. However, A’s manager Bob Melvin vows the team will be even better next year:

The Rays travel to Houston to begin the ALDS on Friday. The Astros won 107 games in the regular season, the most in the league, thanks to their strong offense and impressive starting pitching.

I'm a senior journalism student at Florida. I love sports, and I love covering sports. I'm one of the beat writers for the Gator soccer team right now, and if you follow me on Twitter @johnmiceli13 you'll never miss a soccer update
Previous Gators Receivers Ready to Control the Passing Game
Next Tampa Bay Lightning Face In-State Rival Panthers in 2019-2020 Season Opener