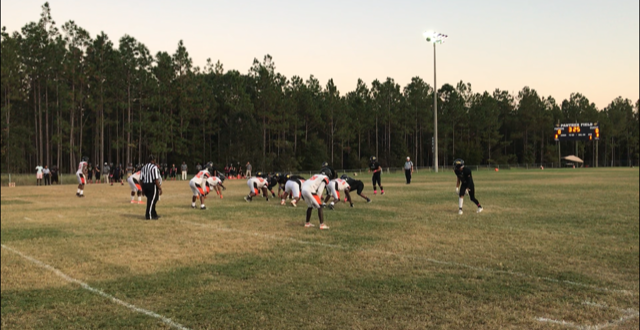 The Hawthorne Hornets traveled to Tallahassee Thursday night where they picked up a 28-6 win over the St. John Paul II Panthers.

The time of possession battle was pretty even in the first quarter with both teams having long drives, but unable to advance deep into the opponent’s territory. However, in the second quarter, Jayquan Williams got the Hornets on the board first. Williams ran it in from inside the five-yard line, and the Hornets took a 7-0 lead.

Getting comfortable with the pass

All year the Hornets have been a run-first team. However, Hawthorne made an effort tonight to pass the ball more to provide balance to the offense. Head Coach Cornelius Ingram spoke about the team’s game plan early in the game, “We wanted to see if we could throw the ball a little bit. It worked out perfect. Some of our young guys started the game off with some big catches, and I think it translated to the defense as well.” Quarterback Key’Shaun Williams said, “We just got used to more passing, and I think got used to reading coverage… Now we can throw it a little more.”

Panthers get back in it

St. John Paul II started to creep back into the game late in the second quarter, going on an impressive touchdown drive to make the game 14-6. Panthers Quarterback Bryson Hill found receiver Jeremiah Gilley in the end zone to trim the Hornets lead to eight going into halftime.

The Panthers answer back with a touchdown drive of their own. Bryson Hill with a touchdown pass to Jeremiah Gilley. The Hornets lead is now 14-6 with 4:58 left in the first half. @ESPNGainesville @SunPreps @ThePrepZone pic.twitter.com/6K6j4HKtu5

Important defensive plays in the second half

The message from Coach Ingram at halftime to his team was simple, “Go make a play.” He wanted to see more effort out of his defense in the second, and he challenged them during his speech. The defense responded to start the third quarter, forcing a fumble on the Panthers’ first second-half drive. The turnover gave the Hornets the football in great field position, and from there, Key’Shaun Williams ran in a touchdown.

The Hornets defense continued to swarm to the ball, making big plays well into the fourth quarter. Defensive back Jayquan Williams returned an interception for a touchdown. It was Williams’ second overall touchdown of the night.

Cornelius Ingram spoke about his team after the game, “I’m proud of my guys for getting this huge win.” He went on to say, “I think we played well on both sides of the ball… I thought we played with a little edge. I think the kids were still upset with what happened last week.” The road ahead for the Hornets is going to be a tough one.

They will play three games in a week’s time starting next Friday in their homecoming game against Indian Rocks Christian. Following that game, Hawthorne will play Williston at home on Monday, October 14th in a game that got pushed back due to Hurricane Dorian. Finally, the Hornets will finish the three-game stretch with a road game against Union County Friday, October 18th.