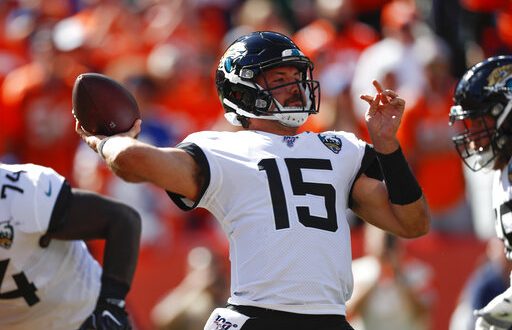 Jacksonville Jaguars quarterback Gardner Minshew throws a pass during the first half of an NFL football game against the Denver Broncos, Sunday, Sept. 29, 2019, in Denver. (AP Photo/David Zalubowski)

The Jaguars and Panthers are facing off in the battle of the 1995 expansion teams on Sunday.

Or the battle of the backup quarterbacks. Or the .500 ball clubs. There are a lot of parallels, here.

There are also a lot of reasons to pay attention to this matchup on Sunday.

Here’s what to look out for before the 1 p.m. kickoff.

This game between Jacksonville (2-2) and Carolina (2-2) will feature two young backup quarterbacks.

Both quarterbacks have performed well during their incumbents’ absence.

Minshew has registered a 2-1 record while tossing for 905 yards, seven touchdowns and just one interception in replacement of starting quarterback Nick Foles. He’s also completed 69.4 percent of his passes.

Allen has a perfect 2-0 record in place of long-time starter Cam Newton. He has thrown for 493 yards, four touchdowns and zero interceptions. His completion percentage stands at 71.7 percent.

As expected, Sunday will be a matchup of the two QBs with the highest passer rating on 10+ yards throws:
Kyle Allen vs. Gardner Minshew@PFF

There are concerns regarding Minshew’s status for Sunday, however. He’s been dealing with a knee injury he suffered in a 26-24 win against the Denver Broncos last week.

Jaguars head coach Doug Marrone doesn’t seem too worried about Minshew’s availability for Week 5, but he did mention the team is being cautious with its quarterback.

“I think you always gotta be careful,” Marrone said. “We just have to do a good job anytime someone shows up on the injury report. I just think you have to be mindful of it.”

He should be good to go against Carolina.

It’s hard enough to move the ball against an NFL defense with a starting quarterback on the field.

Doing so with a backup still proves a tough task, especially with Minshew and the Jaguars going up against Carolina’s vaunted defense.

Marrone made sure to mention the respect he has for the Panthers’ defensive unit, this week.

“(It’s) probably the most disciplined defense I’ve been able to see,” he said. “They do a great job…their wave of defensive linemen is outstanding. The linebackers are great players…they’re instinctive, tackle, they’re right where they should be all of the time…and their secondary is playing extremely well.”

The #Panthers have 14 sacks in the last 2 weeks of football.

I had to triple check this stat before I sent it because that just seems absurd.

They have a total 18 on the season. Hello, defense

The Jaguars’ defense has been solid, but not as dominant as the Panthers. The unit’s biggest strength has been its run defense and on the defensive line. Jacksonville is allowing 99.5 yards per game on the ground, good for 13th-best in the league.

After registering 179 scrimmage yards (93 rushing, 86 receiving) and a rushing TD in Sunday’s win, Christian McCaffrey now joins Jim Brown as the only players in NFL history with three games of at least 175 scrimmage yards and one TD in their team’s first four games of a season.

Panthers head coach Ron Rivera recognizes the talent on the Jaguars’ defense. However, he realizes he has a chance to open up his playbook against the Jaguars with the absence of star cornerback Jalen Ramsey.

“When Jalen is out there, you see (the Jaguars) putting him on the opponent’s best receiver,” he said. “Without him there, you don’t see that. You see a lot more balanced coverages and stuff like that. He’s a difference-maker on the football field.”

Allen still holds the Jaguars defense in high regard, even without Ramsey.

“I think it’s a good defense, man,” he said. “When you look at their defense, they don’t do a lot. But what they do, they do well…I think they’re just a really well-coached, well-techniqued team.”

After their matchup, the Jaguars will host the New Orleans Saints on Oct. 13 at 1.

The Panthers will trek across the Atlantic to play the Tampa Bay Buccaneers in London at 9:30 a.m. EST.

@dylanoshea24
Previous Noah Locke: A Look at the Gators’ Sophomore Guard
Next Hawthorne earns a road win in Tallahassee thanks to a big second half from its defense