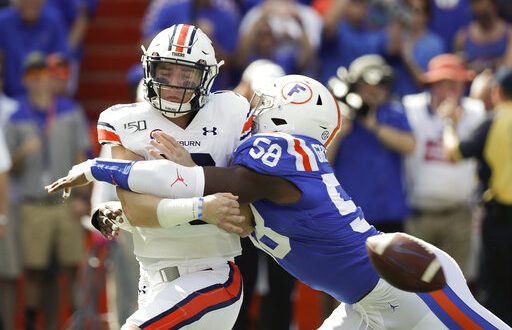 Gators’ Defensive Linemen Up For Challenge Against No. 7 LSU

After a crucial 24-13 victory over Auburn, the No. 7 Gators travel to Baton Rouge to face the No. 5 LSU Tigers on Saturday, Oct. 12. Both teams have yet to lose a game, though the Gators enter one of college football’s toughest stadiums as double-digit underdogs. Defensive lineman Kyree Campbell is not phased by the so-called ‘underdog’ label.

Fellow defensive lineman Adam Shuler admits while he doesn’t personally think about being overlooked. He knows that some of his teammates use it as extra motivation.

As previously stated, the Gators have one of the best defenses in the country. Whether it’s because of those extra motivational factors or not, something has clearly been clicking for the Florida defense.

Shuler attributes part of the team’s success to the talent and versatility littered throughout the roster.

Campbell adds that while he and the rest of the defensive line have certainly helped to maintain one of the best units in college football, the secondary has also played well. That could explain why eight of Florida’s nine interceptions have come from the defensive backs.

That secondary could face its toughest challenge on Saturday night, as LSU quarterback Joe Burrow has built up an early Heisman campaign. The Ohio State transfer leads the SEC in completions, passing yards and total yards, while also ranking second in the NCAA with passing touchdowns. On top of that, Burrow sits atop all quarterbacks in the country with a 78.4 completion percentage.

The school single-season record is 28 by JaMarcus Russell in 2006. pic.twitter.com/oslPkQ1xiH

While Shuler acknowledges Burrow’s early-season accolades, he’s confident in the team’s ability to slow Burrow down.

Catch the Gators face Burrow and the Tigers at 8 p.m. on Saturday, Oct. 12 on ESPN.