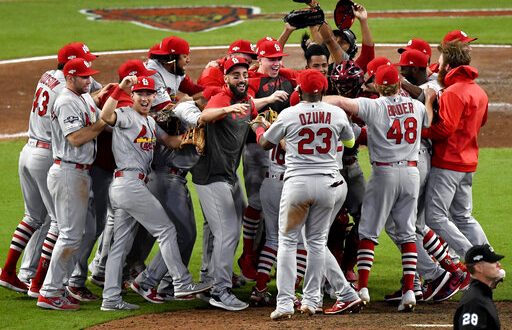 Those are just a few of the words fans and spectators may use to describe Wednesday’s game between the St. Louis Cardinals and Atlanta Braves.

The Cardinals used an astounding 10-run-first inning to bounce the Braves from the playoffs. The final result, 13-1, while rather harsh on Atlanta, proved that playoff baseball remains as unpredictable as ever. The Braves remain without a playoff series win since 2001.

The ballgame was effectively over just a few minutes after it began. The first inning was a total disaster for Braves’ starter Mike Foltynewicz right from the onset. Left-handed reliever, Max Fried, did little to stop the bleeding when he entered the game with the score 4-0.

The Cardinals will now host the Washington Nationals tomorrow for Game 1 of the NLCS. Let’s take a look at the historic 1st inning that gave Dave Martinez’s team complete control over the series decider.

Walking into the next round… ✌️ pic.twitter.com/qUnosWbSaX

Foltynewicz’s appalling performance was a big part of the surprise that occurred on Wednesday. “Folty” was spectacular in Game 2 (7 IP, 3 H, 7 Ks, W) as he led the Braves to a 3-0 win. Not this time. Not even close.

The Braves’ Game 5 starter spoke after the game regarding his performance.

The first inning unraveled quickly for Atlanta and Foltynewicz. Here’s how it developed:

That’s how it happened. The most runs ever scored in the first inning of a playoff ballgame.

One of the key moments in the inning came with the bases loaded and 1 out. All-star 1B Freddie Freeman booted a ground ball that could’ve potentially been an inning-ending double play and kept the score at 1-0.

When the inning finally concluded, the home crowd was in pure disarray. They still managed to sarcastically cheer for their Braves when the third out was recorded.

After the game, Braves’ skipper Brian Snitker spoke about the demoralizing nature of the Game 5 loss.

Longtime Brave and journeyman Brian McCann announced after the game that he would be retiring. For him, it’s a tough final memory of the game he’s excelled at throughout his entire career.

For the Braves, the ugly scoreline in their final game shouldn’t mask a terrific season. Atlanta won 90+ games for the second straight season. Their young core of players, Ronald Acuña Jr., Ozzie Albies, Freddie Freeman as well as the addition of Josh Donaldson made for a daunting lineup in 2019.

Atlanta was simply sucker-punched in the most important game of their season.

Both the Cardinals and Nationals are yet to name their starters for tomorrow’s game. If both the NLDS series are anything to go by, MLB fans will be in for a riveting conference series between two of the National League’s best clubs.

Sports media and management student at the University of Florida. Content creator for ESPN 98.1 FM/ 850 AM WRUF.
@TheEdgarChavero
Previous Gators’ Defensive Linemen Up For Challenge Against No. 7 LSU
Next No. 19 Gators Soccer Looks to Stay Undefeated in SEC