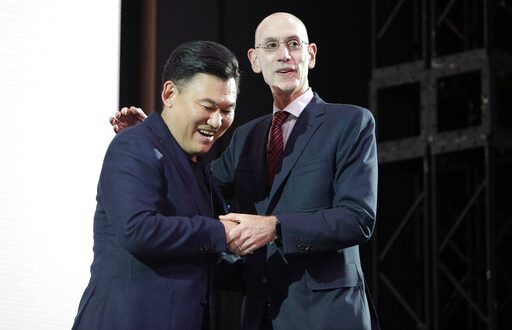 NBA Commissioner Adam Silver, right, and Rakuten, Inc. Chairman & CEO Mickey Mikitani greet each other during a welcome reception for the NBA Japan Games 2019 between the Toronto Raptors and the Houston Rockets in Tokyo, Monday, Oct. 7, 2019. (AP Photo/Kiichiro Sato)

NBA Rockets into Challenge with China

Violence and chaos has burdened China all summer long. Tear gas and water cannons are being used to combat protestors rallying for more democracy in China.

And now, China’s problems have become the NBA’s problems — minus the tear gas and water cannons.

General Manager Daryl Morey and Owner Tilman Fertitta feuding a little bit on the TL… Daryl Morey forced to delete a tweet about what's happening in Hong Kong at the moment, I would imagine a swift phone call came from ownership.

Personally, Morey can say whatever he wants. pic.twitter.com/NdeqI8NPL1

Houston Rockets’ general manager Daryl Morey tweeted out his support of the protestors over the weekend in what CNN is calling the “most problematic and potentially damaging tweet in corporate America this year.”

However, Chinese officials won’t be forgetting the deleted Tween anytime soon. In fact, China is ceasing all business operations with the NBA until the league totally renounces Morey’s statement.

The ball is in the NBA’s court

Looking ahead, what the NBA does next is a lose-lose for the league.

Morey could be fired from the Rockets, which brings serious complications in terms of how the NBA might be infringing on first amendment rights.

However, if the NBA were to rid of Morey after his controversial outing on social media, NBA fans may feel as though the league is kowtowing to China. This belief could likely harm relationships with sponsors in the U.S.

NBA Commissioner Adam Silver seems to stand behind Morey and defends the Rockets’ GM’s right to freedom of speech.

If Silver and the NBA continue to stand behind Morey they could potentially lose relations with China — which would be a big loss.

The Houston Rockets are the most popular NBA team in China — all thanks to Yao Ming’s eight seasons with the Rockets. According to CNN, China makes up 10% of the leagues revenue — a number that could grow to 20% by 2030.

For that reason, losing the partnership with China would rid the NBA of their largest growing market.

Adam Silver is set to travel to China on Wednesday.  China’s state broadcaster canceled its plans to air the preseason game between the Los Angeles Lakers and the Brooklyn Nets. Silver hopes that he and Chinese officials can find common ground and resolve the issue.

CCTV Sports is reviewing all cooperation and business with the NBA following Silver’s outspoken support of Morey’s politically charged Tweet, the Chinese broadcaster said in a statement.

“We’re strongly dissatisfied and oppose Adam Silver’s claim to support Morey’s right to freedom of expression. We believe that any remarks that challenge national sovereignty and social stability are not within the scope of freedom of speech.”

“But if those are the consequences of us adhering to our values, I still feel it’s very, very important to adhere to those values.”

Ainslie is a journalism major at the University of Florida where she specializes in Sports Media. Her main passion is college football as it was a huge part of her childhood. Ainslie serves as a current correspondent for the Ocala Star-Banner, a newspaper for the Ocala, Florida area. She currently covers Marion County high school sports.
Previous Rays Beat Up Verlander to Force Game 5 of ALDS
Next Dodgers host Nats in critical NLDS game 5