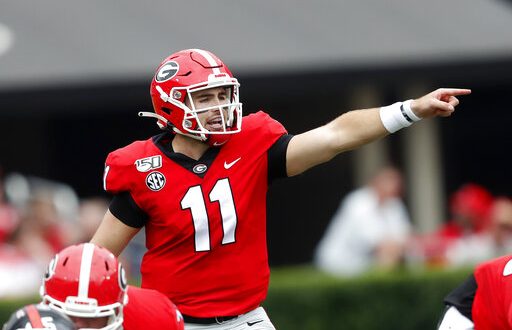 FILE - In this Sept. 14, 2019, file photo, Georgia quarterback Jake Fromm (11) is shown In the first half of an NCAA college football game against Arkansas State, in Athens, Ga. Fromm says Jim Chaney, the Bulldogs' former offensive coordinator, "really kind of introduced me to this pro-style offense." Now Chaney is running Tennessee's offense, and Fromm wants to show he learned his lessons well when the No. 3 Bulldogs face the Vols on Saturday. (AP Photo/John Bazemore, File)

On Oct. 12, the heavy favored Bulldogs (5-0) will look to keep their undefeated season alive as the Gamecocks (2-3) come to town for an SEC match up.

Georgia is ranked number three for a reason. They boast a well balanced offense and a ferocious defense. Led by junior quarterback, Jake Fromm, the Bulldogs have put up monster numbers, averaging 42.8 ppg. The Gamecocks’ offense deserves plenty of respect as well, averaging 30.6 ppg.

While the Gamecocks have been able to put up points this season, it will be a tough task to reach their season average. Georgia’s stout defense is allowing only 10.8 points on average, and are yet to surrender more than 17 points.

Meanwhile, South Carolina’s defense has been far less intimidating. They have allowed an average of 24.4 points to opposing offenses especially struggling against Alabama and Missouri by giving up 47 and 34 points, respectively.

This Game Will Be Won In The Trenches

The Bulldogs and Gamecocks both pride themselves on the run game. Each team has averaged over 200 rushing yards a game. Both will look to keep that trend going during this game. However, it will likely be easier for the Bulldogs to reach their season average of 250 rushing yards.

Junior running back, D’Andre Swift, has been the lead back and continues to be one of the most dynamic backs in the country. Swift has been as advertised so far, and had a season high 147 yards against Vanderbilt.

This weeks match up will offer a tough challenge for Swift and the Bulldogs’ run game, as the Gamecocks have one of the most talented defensive line in college football. Senior defensive tackle, Javon Kinlaw is a 6’6, 302 lb wrecking ball, who anchors the line. However, if Swift and the other Bulldogs can get passed him and to the next level, the Bulldogs could have some explosive plays.

Swift’s ability to get to the second level will be key for the Bulldogs’ goal of having more explosive plays.  Forcing the Gamecocks to commit to stopping the run will make Fromms’ job a lot easier. Fromm is already one of the most accomplished quarterbacks. However, Georgia’s head coach, Kirby Smart wants more splash plays through the air.

Fromm has not needed to take control of games, but Kirby will feel more comfortable once he sees him do it. He has only eclipsed 200 yards and multiple TDs twice this season. Fromm will need to do more to prove they are contenders.

If the Gamecocks are to upset the Bulldogs, it will likely require a huge performance on both sides of the ball. Running the ball against Georgia has been nearly impossible, but Kirby still wants more from his defense.

Having an advantage in nearly every statistical category could mean that the Gamecocks are in for a long game, especially in front of the Bulldogs’ fans.

Previous Vanderbilt Looks for Rising Opportunity Against UNLV
Next Top 25 Showdown: No. 17 Iowa host No. 10 Penn State in week seven.