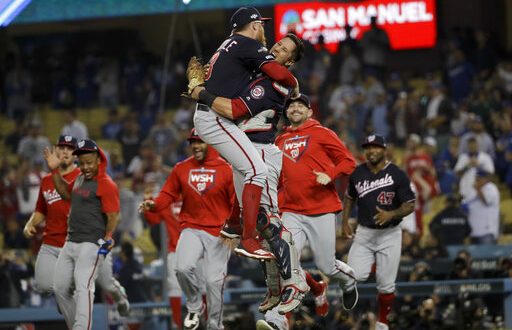 The Los Angeles Dodgers have represented the National League in the World Series the past two seasons. That will not be the case in 2019.

The Washington Nationals fell into a 3-0 deficit early but were able to rally behind some clutch hitting. Stephen Strausburg struggled out of the gates but was able to limit the damage and control the ballgame from there on out. Howie Kendrick solidified himself in postseason history as he put the nail in the coffin on the Dodgers championship hopes.

How the Nationals Pulled it Off

From the get-go, it looked as if Los Angeles was going to be able to put away the feisty Nats for good. Max Muncy took a 3-1 pitch from Strausburg over the fence in right field for a two-run home run.

After giving up the Muncy home run in the first, trouble found Strausburg again in the 2nd inning. This time it was in the form of Enrique Hernandez. Hernandez took Strausburg’s second pitch of the inning over the fence in left-center field to give the Dodgers a 3-0 lead. That would ultimately be the last run for the Dodgers in 2019.

The Nationals comeback commenced with a Juan Soto RBI-single in the 6th inning to score Anthony Rendon, cutting the deficit to two.

The 8th inning may very well be the biggest in franchise history. Going up against future Hall of Famer Clayton Kershaw, it took the Nationals two pitches to change the course of their season. Anthony Rendon saw a low breaking pitch and sent it over the fence to bring Washington to within one run. Before Kershaw was able to re-group, Juan Soto took advantage of a hanging breaking ball on the very next pitch to tie the ballgame.

It was a standstill until the 10th inning. Dodgers reliever Joe Kelly walked Adam Eaton to lead off the inning then followed that by allowing a double to Anthony Rendon. Los Angeles Manager Dave Roberts chose to stick with Kelly as he decided to intentionally walk the dangerous Juan Soto. The decision did not pay off as Howie Kendrick single-handily ended the Dodgers season. The 14-year veteran hit a grand slam, punching the Nationals ticket to their first NLCS.

THIS IS HOWIE HIT A GRAND SLAM IN A TIE GAME OF THE 10TH INNING OF GAME 5 OF THE NLDS!!!#BEATLA // #STAYINTHEFIGHT pic.twitter.com/3RMsby8CBl

For the Dodgers, it is another disappointing end to a season after losing the last two World Series.

Clayton Kershaw continues to struggle in the playoffs which will lead to even more pressure. The Nationals, on the other hand, shift their focus to the St. Louis Cardinals in the NLCS. Game 1 will be in St. Louis on Friday, first pitch is slated to be at 8:08.

Previous No. 19 Gators Soccer Looks to Stay Undefeated in SEC
Next Clemson Prepares for ACC Opponent