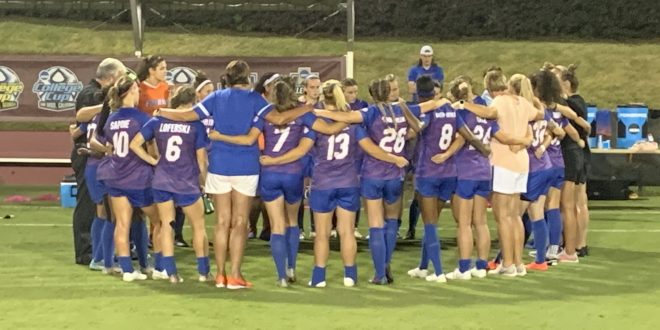 No. 19 Gators Soccer Looks to Stay Undefeated in SEC

The University of Florida soccer team (8-4) has won their last six games, including back-to-back victories over top-15 opponents. Their impressive play has earned them a spot in the national rankings.

The Gators were awarded the No. 19 spot in the United Soccer Coaches top 25 rankings that came out on Tuesday. The team will look to continue their streak and justify its spot in the poll with two more SEC games coming up this weekend.

The Rebels (7-3-2) are the next team looking to put a halt to Florida’s undefeated start to conference play.

Ole Miss started the season well, winning six of their first seven matches. Lately, though, they have sputtered. The Rebels have won just one of their last five games and are coming off a 3-0 defeat to No. 15 Arkansas.

Junior forward Channing Foster was named to the All-SEC second team last year, and she has continued her strong play this season. She leads the Rebels with seven goals, including most recently scoring an overtime winner against Auburn two games ago.

Despite their recent struggles, Florida coach Becky Burleigh is not underestimating her SEC opponent:

Ole Miss is 4-1-1 at home this season, and the team is no stranger to overtime games. Five of the Rebels’ 12 matches so far have gone past regulation.

Sunday is Burleigh’s birthday. Her present: hosting the Wildcats (5-6-2) for an afternoon kickoff.

Last season, Kentucky struggled when it came to SEC play, going 1-9, and this year is no different. The team has yet to win any of its four conference games, being outscored by a 12-3 margin.

Forward Hannah Richardson is a player to watch for the Wildcats, though. The freshman has burst onto the scene with eight goals to lead the squad, and she was called up to the US U-20 National Team earlier this year.

Kentucky has lost its last six games but will try to stop the slide in Gainesville on Sunday.

The Gators are 4-0 in SEC play, which ties them for first in the SEC East with No. 7 South Carolina.

Florida midfielder Parker Roberts is proud of the way the team has been playing, but knows they cannot get complacent:

Senior forward Vanessa Kara has been a goal-machine lately. She has scored four in her last five games, including two in last Sunday’s victory over No. 12 Texas A&M. Her effort was enough to earn her SEC Offensive Player of the Week Honors.

I'm a senior journalism student at Florida. I love sports, and I love covering sports. I'm one of the beat writers for the Gator soccer team right now, and if you follow me on Twitter @johnmiceli13 you'll never miss a soccer update
Previous Cardinals Trounce Braves in Historic Game 5 of ALDS
Next Nationals Shock Dodgers in NLDS, Will Face St. Louis In NLCS