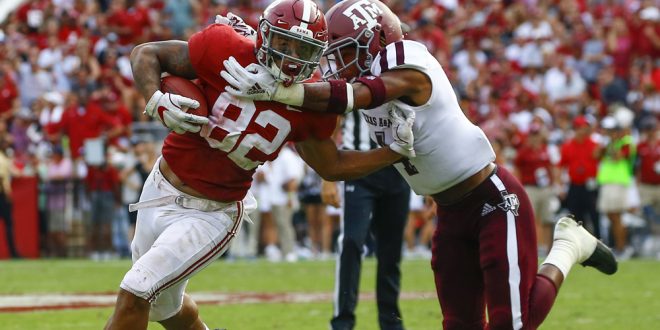 Alabama tight end Irv Smith Jr. (82) breaks free from the arms of Texas A&M defensive back Derrick Tucker (4) as he carries the ball during the second half of an NCAA college football game, Saturday, Sept. 22, 2018, in Tuscaloosa, Ala. Alabama won 45-23. (AP Photo/Butch Dill)

These two teams have only met 11 times in the past. Alabama leads the series 9-2, winning the last six games since 2013.

This week the Crimson Tide are ranked No. 1 and the Aggies are No. 24 in the AP Top 25 Poll after both teams had a bye last weekend.

As Alabama head coach Nick Saban heads to College Station, he knows what the Aggies are capable of.

Quarterback Tua Tagovailoa had a completion rate of 72.2% for 418 yards and six touchdowns. Wide receiver Devonta Smith had an explosive game with 11 receptions for 274 yards and five touchdowns.

However, the area Alabama struggled in against the Rebels was the running game where rushing leader running back Najee Harris only had nine carries for 71 yards.

Saban is aware of the well-rounded team Texas A&M is.

Another work in progress for Alabama has been their special teams. Against Ole Miss, a costly mistake by Alabama turned the ball over to the Rebels to give them their first touchdown.

Saban made it a focus to fix these errors against the Aggies.

As previously mentioned, the Aggies have struggled to beat Alabama in the last six games. None of the last six games have been even close, but head coach Jimbo Fisher hopes to capitalize on their home-field advantage this time around.

Against Arkansas, the Aggies barely got the win, defeating the Razorbacks, 31-27.

Quarterback Kellen Mond had a completion rate of 65.7% for 251 yards, three touchdowns, and one interception. The rest of the offense struggled to get yardage on the field, but it was enough for the win.

Running back Jacob Kibodi had nine carries for 38 yards and wide receiver Jhamon Ausbon have seven receptions for 82 yards.

Fisher wants to play the game, but play it well.

For the Aggies to be successful, the defense needs to stop the Crimson Tide’s passing game especially with Smith at the helm of receptions. This is not going to be a walk in the park, but with smart strategy, they can get it done.

I am a fifth-year journalism major, specializing in sports and media. My favorite sport to watch and cover are college and NFL football. When I'm not doing that, I enjoy hanging out with my cat, going to concerts and traveling.
@sportsabrina
Previous Ole Miss Hands Gator Soccer First SEC Loss
Next Tigers Bring Tough Defense To Missouri