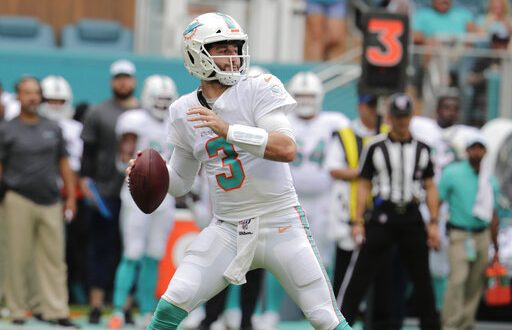 A fired head coach, two winless records, and a quarterback juggle later, two of the worst teams in the NFL meet to deliver either one a win.

Both teams enter the contest shorthanded in one way or another. The struggling Miami Dolphins (0-4) will host the equally unlucky Washington Redskins (0-5). The one defining characteristic is the empty win column, but whose will change?

Improvisation at its Finest

A Jay Gruden-less Washington Redskins needs some additional navigation. Interim coach Bill Callahan is tasked with a Redskins team that is desperately chasing a win.

Electing Case Keenum as this weekend’s starter is the first step. Though Keenum didn’t see a lot of action after a dismal performance against the Giants, his season stats collectively speak in favor of the quarterback. Keenum’s made somewhat of a case in seven touchdowns and four interceptions, with 970 yards. They aren’t the prettiest stats, but re-assessing a team’s offense will never look all that glamorous. He’ll be offered a bit of a break this week against the NFL’s worst defense. That type of flexibility will allow him to demonstrate that the Redskins could be in good hands.

Meanwhile, the Miami Dolphins are fresh off of a bye week, but that doesn’t change an exhaustive injury report. 11 players don the Dolphins’ injury report, including Xavien Howard, Bobby McCain, Jakeem Grant and Reshad Jones. Head coach Brian Flores is hopeful both Howard and Grant will make a return, but doubt clouds the return of either player.

Our final injury report ahead of #WASvsMIA.

In any case, the Dolphins are entrenched in rebuild mode, with the disposal of talent in exchange for draft picks early in the season. It’s a matter of going through the motions at this point, and wherever that leads the Dolphins, this upcoming weekend is just another stepping stone in that direction.

The Duel for a Dub

The Redskins and Dolphins will face off on Sunday, Oct. 11 at 1 p.m.