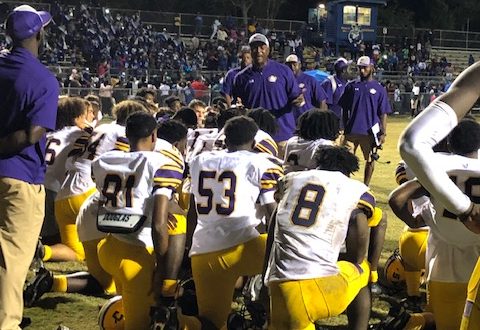 It seemed like an all to familiar sign for Columbia High School football fans. After crushing the Tigers’ state title dreams in the playoffs last year, the Robert E. Lee Generals squandered another opportunity for the Tigers on Friday night. A chance at a perfect season and possibly a district title.

After starting the season red hot offensively, the Tigers have kind of cooled down these last few games. This was the case against Madison County last week and against Lee.

On Columbia’s first drive, senior quarterback Jordan Smith’s pass was picked off by Generals’ defensive back Larry Smith and returned all the way down inside the Tigers’ 10-yard line.  Lee capitalized on the turnover after sophomore quarterback Cale Zarah connected with junior receiver Timothy Gallion on fourth down to put the Generals up 7-0 early.

The struggles would continue for Columbia’s offense in the first half, as Smith still couldn’t seem to get into any rhythm after throwing the interception. Lee’s pass rush also had the QB scrambling to make accurate throws downfield.  Points were finally in sight for the Tigers late in the first quarter, but a botched snap and recovery by the Generals kept them off the scoreboard.

One of the main issues that has haunted the Tigers’ defense against Lee in the past is not being able to stop the run. So far this season, this group has been able to control the ground game against opponents, but once again, the Generals were able to have success early in this category.

Sophomore running back Zaire Lee was able to find some running lanes on Lee’s second drive and made the score 13-0 after punching in a touchdown on Columbia’s half-yard line with 8:22 remaining in the second quarter.

Turnovers were one of the key factors in the Tigers’ loss, and head coach Brian Allen knows that those kind of things can’t happen against good football teams in tough environments.

“Tonight was a night of missed opportunities,” he said.

A common theme with this Columbia football team so far has been its second half dominance. After having zero success moving the football offensively, and a defense that was getting gashed in the run game, a fire was lite under the Tigers again.

It started when Columbia’s defense shut down Lee’s first drive of the second half. On the very next series, the Tigers’ offense wasted no time, as they sprinted down the field and scored quickly on a Jordan Smith touchdown pass to freshman receiver Tray Tolliver to put the score at 13-6 with 6:53 left in the third quarter.

This was seven of 21 unanswered points the Tigers would go onto to score in the second half. Columbia would go onto to tie the game two drives later after a Smith touchdown pass to senior wideout Marquez Bell with 1:28 left in the third quarter.  The Generals finally found the scoreboard again mid-fourth quarter when Zarah broke for a huge touchdown run to put the score at 21-19. After a successful two point conversion, the score was tied at 21-21 with 7:53 left in the game.

Columbia’s defense made one last stand to give the offense a chance to win it with just over six minutes left. A couple of penalties moved the Tigers into Generals’ territory.

With 1:21 remaining, head coach Brian Allen elected to leave the offense on the field on fourth down. Smith was able to scramble and find senior wide receiver Lanadrick Bradley who turned and reached out for a first down.

But the Tigers quickly went from ecstatic to a shock after Smith’s pass was completed to Bradley again, but the Lee secondary forced the ball out near the goal line resulting in a turnover and free football.

On the first drive of overtime, Columbia was stopped by the Generals’ defense and was forced to bring out the kicking unit. What was originally supposed to be a 35 or 36-yard field goal turned into roughly a 40-yard attempt after a false start. The kick was on target, but took a bounce off the crossbar after falling just short.

The Generals wasted no time on their first drive in OT, as they nearly scored on the first play. After the Tigers’ defense came up with back-to-back stops, Lee was faced with fourth and goal from the half-yard line.

A gutsy decision to go for it paid off, as the Generals punched it in to secure the victory, 27-21.

For Columbia, miscues and opportunities will be the takeaway from this one. Last week, the Tigers were able to use a dominant second half to salvage what was a poor first half performance on both sides of the ball. But on Friday night, there were one to many that came back to hurt them.