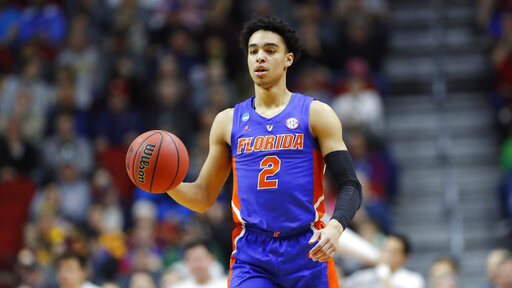 Andrew Nembhard’s freshman season was one for the books. The 6-foot-5-inch, 191 pound, guard from Ontario, Canada, managed to go down in UF history after posting 196 assists. This is the fourth-highest single-season total in Florida history and second-most by a freshman.

Nembhard also managed to score a 3-pointer with 1.2 seconds left and lifted Florida to a victory in the SEC Tournament quarterfinals against ninth-ranked LSU. Nembhard’s honors include an SEC Freshman of the Week award and being part of the 2019 SEC All Freshman Team.

With no shortage of success and talent, it was no surprise when the freshman guard decided to declare for the NBA draft. However, fate would see him withdraw from the NBA draft last May and return to UF for his sophomore season.

The guard who was the first Florida freshman to start every game of the season since Bradley Beal did so in 2011-12, has been practicing with the team during the off season.

“It’s probably coach White’s best class,” Nembhard said. “You can tell they have a lot of confidence on the floor, really good on both sides of the floor.”

The Gators ended their last season with a 20-16 overall record and were eventually eliminated by Michigan.

“I feel like we need to hold a standard on that side of the ball. That’s kind of our backbone,” Nembhard said. “What coach White really wants to do this year is play defense.”

However, the trio of freshmen that included Noah Locke, Keyontae Johnson and Nembhard will meet again on the court this season as sophomores.

“Offensively, I like the way that we’re sharing the ball. We’re pretty versatile,” said head coach Mike White. “Especially compared to how we’ve been the last few years.”

The Gators’ season officially kicks off at home against the University of North Florida on Nov. 5 at 7 p.m.