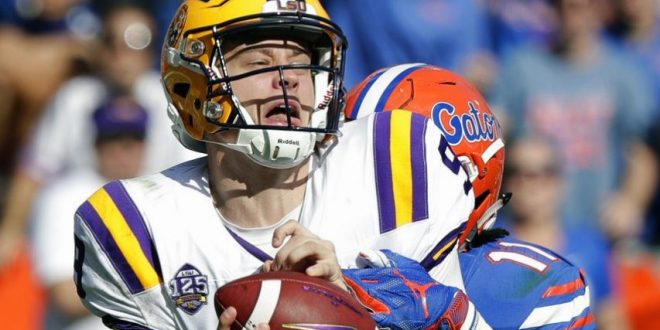 LSU ready for the challenge from Florida

Top-10 games are something that the LSU Tigers are not unfamiliar with. They have their next one with the seventh ranked Florida Gators Saturday night.

The Tigers have started the season 5-0 for the second consecutive season. However, the 5th ranked team in the nation is doing it in a very different way. The LSU offense is flat out good. To put it into perspective, they’re better than Oklahoma. LSU is first in points per game in the nation, averaging 54.6 points a game. They’re second in total offense, putting up 571 yards of offense a contest.

Red-shirt senior quarterback Joe Burrow is the catalyst for the offense. Burrow has thrown for 22 touchdowns this season and is only six away from breaking the LSU single season record. Most impressive though is Burrow’s completion percentage. through five game Burrow is completing 78 percent of his passes and over 70 percent of his passes when under pressure. That matches up well against a Gators pass rush that’s third in the nation in sacks (26).

Pro football Focus analyst Cam Mellor agrees that Burrow against the Florida pass rush is the biggest matchup of the game.

Depth on the outside

A big help for Burrow is a deep core of wide receivers. The trio of Justin Jefferson, former Gator commit Ja’Marr Chase and Terrance Marshall have combined for 1,302 receiving yards and 19 touchdowns. However, Marshall will miss Saturday’s match up after having foot surgery. Regardless, Jefferson and Chase have shown to be a lethal matchup on the outside.

Another look at that Joe Burrow TD to go up 35-6. Justin Jefferson with the catch.#GeauxTigers #CFB pic.twitter.com/aITiFkP9Qj

However. the LSU recieievrs will face their biggest test of the season against the Florida secondary. Bolstered by C.J. Henderson and Marco Wilson at corner, leads the nation in interceptions with 12 while only allowing 183 passing yards a game. On the flip side, LSU averages 416 passing yards a game and Burrow has only thrown three interceptions.

LSU radio analyst and former player Doug Moreau has seen how impactful the depth at receiver has been.

However, due to the uptick in the passing game, the run game has taken a step back for LSU. Clyde Edwards-Helaire leads the Tigers on the ground with 360 yards. That leads a Tigers groun game that averages 155 yards a game, which is 75th in the nation. The Gators rank 16th in rushing defense and held an Auburn team that averages over 229 yards a game to only 124 yards in their win over the then 7th ranked team in the country.

Running the ball may not be necessary though with the way Burrow has been throwing the ball.

Can the defense step up?

All the talk has been about the Florida defense, but LSU boasts a pretty stout unit of its own. The Tigers sit at 17th in the nation in total defense and feature three of the top defensive backs in the country in Grant Delpit, Kristian Fulton and Derek Stingly Jr. The pass defense has been respectable, allowing 206 yards a game. Those numbers greatly improved last weekend when LSU held Jordan Love and the high-flying Utah State Aggies to only 140 yards through the air and recorded three interceptions.

However, the secondary has been torched at times this season. Against Texas, LSU allowed 409 passing yards to Sam Ehlinger and Co. along with four passing touchdowns.

The run defense has been even better, allowing only 81 yards a game, which sits at 8th in the country. Couple this with the Gators pedestrian run game (89th in the nation, averaging 139.8 yards a game) and the Tigers could make the Gators one dimensional.

One caveat though is how LSU has played against Power-5 opponents. The Tigers allowed 38 points to both Texas and Vanderbilt earlier in the season.

What may help substantially for LSU is starting middle linebacker Michael Divinity Jr and defensive end Rashard Lawrence are both expected to return this week after missing last weeks game.

Tiger Stadium at night is a whole different animal. Over 102,000 roaring fans will give the Gators the same treatment they gave Auburn a week ago.

Since it’s a 7 p.m. CT kickoff, the LSU faithful will have plenty of time to tailgate ahead of time (you can kind of imagine what that means). This will be unlike anything Florida has faced this season. If the crowd noise can effect Kyle Trask in a similar way it effected Bo Nix a week ago in Gainesville, that’s a huge advantage for LSU.

A win for LSU means the Tigers are the only team in the nation with two wins over top-10 teams. How about that for a resume, if they can get the job done.