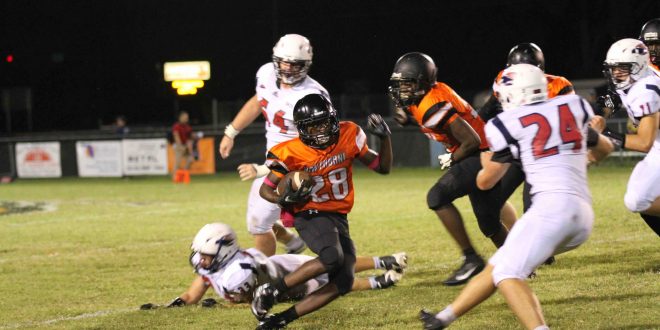 The Hawthorne High School football team comes out victorious in a weather make up game Monday night as they beat Williston 24-8.

Williston scored on the last play of the third quarter to try and get back in the game but the Hornets answered back to put the game away.  Key’Shaun Williams scored his third rushing touchdown of the game, bringing the score to 24-8 with 11:04 left in the game.

“We started fast, but I do wish we could have finished a little cleaner,” Hawthorne coach Cornelius Ingram said.

Williams, a senior, has been showing his speed during his past two games. He single-handily ran in five touchdowns between last Friday’s game and the game on Monday. “I think our running has been pretty good,” Williams said. “But I do think it could be better.”

The Hornets’ defense is comprised almost entirely of underclassmen, with less than half of their starters being seniors. During the first half, Hawthorne kept the Red Devils out of the red zone and prevented any scoring opportunities. With 1:04 left in the second quarter, Hawthorne junior  Dre Lawrence intercepted a pass from Chris Jinorio to end Williston’s possessions for the half.

However, the game shifted in the second half as Williston began to have more success running the ball. Red Devils quarterback Chris Jinorio found his receiver, Marland Williams in the end zone with just seconds left in the quarter. The two-point conversion that followed, ended the third 17-8 with Hawthorne still in the lead.

“Mental mistakes [caused us to give up some big runs],” Key’Shaun Williams said. “We lined up wrong for most of the plays. So, when they were driving down the field most of us were just lined up wrong. We just got to fix that and we will be alright.”

Marland Williams is on the receiving end of the Red Devils first touchdown of the night. Hawthorne still leads Williston but the score is now 17-8 going in to the 4th quarter. @ESPNGainesville @FlaHSFootball @ThePrepZone pic.twitter.com/OvXzSFtfSG

Late in the fourth, Williston once again had possession, but was unable to convert on fourth down. From there, Hawthorne took over and ran the clock out until the game was over.

“Our defense was disciplined throughout the night,” Ingram said. “I think they gave up a little right there in the third quarter, but we had them at fourth down maybe twice. We should have been getting off the field, but we had some missed assignments that came back to bite us, but that’s part of football. Our guys came right back down to offense and punched one right in the end zone. I am definitely proud of our guys and this is a great win for our program because- I don’t know Williston’s record exactly- but that’s a tough football team.”

Another aspect of Hawthorne’s game that has helped them to their 6-2 record has been their consistency on special teams. Senior Tyler Barbato, is the only kicker and punter currently on the Hornets’ roster. Barbato went 3 for 3 in extra points and 1 for 2 in field goals. The kicker has also proven dependable on kick-offs, forcing touch-backs on almost every attempt.

Due to the precautions taken during Hurricane Dorian back in late August, neither team was able to practice sufficiently. This was one of the reasons for the push-back in the schedule and the rareness of a Monday night game. This also caused Hawthorne to install a Sunday afternoon practice in spite of Friday night’s game. “I don’t think we had any guys fatigue, I think we just had guys in the wrong gap,” Ingram said about the Hornets’ back to back games and their effect on the team. “Our offensive line and our defense are definitely the winners of tonight. They played awesome, because you have to be disciplined, and our guys were disciplined and that’s why we had a lot of success.”

Interviews and Video By: Chase Anschultz