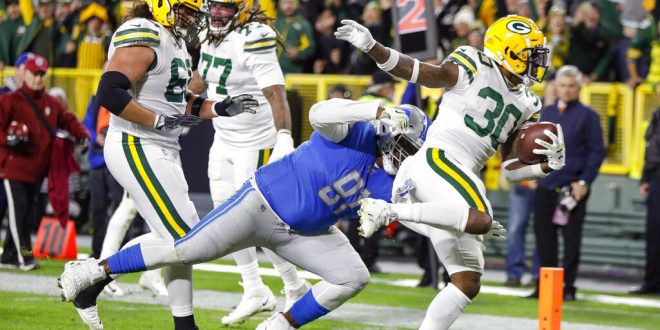 Once again, Aaron Rodgers and the Green Bay Packers ripped the hearts out of the Detroit Lions as Mason Crosby hit a 23-yard field goal as time expired to lift Green Bay over Detroit 23-22 on Monday Night Football.

Rodgers struggled to move the ball consistently down the field throughout the night as he was without his top target, Davante Adams, who missed his second straight game because of an injury. Rodgers finished the night 24/39 for 283 yards, two touchdowns and an interception.

In addition, other receivers such as Marquez-Valdes Scantling, who missed a portion of the game with an ankle injury, and Geronimo Allison, who was carted off the field after a helmet-to-helmet collision, missed time during the contest.

This opened up opportunities for players like second-year pro Allen Lazard who caught his first career touchdown pass. In fact, Rodgers lobbied for Lazard to play in the fourth quarter. Down 22-13, the two connected for a 35-yard touchdown to pull within one score.

Take a listen to what Rodgers had to say about his favorite target on Monday night.

The Lions jumped out to an early 13-0 lead but were never able to take full control of the game. This was partly because they struggled to put the ball in the end zone. Detroit’s kicker, Matt Prater, was 5/5 in his field goal attempts, a long of 54 yards, and accounted for 16 of his team’s points.

The Packers jumped out to 3-0 in the NFC North for the first time since 2012. This might not have been the case if not for two crucial fourth quarter penalties against the Lions.

Detroit’s Trey Flowers was flagged for illegal hands to the face twice in big moments, both on third down plays. The first penalty set up Rodgers’ touchdown to Lazard and the second allowed Green Bay to run the clock out until Crosby’s game winner.

After looking at the replay, it appears Flowers had his hands on the neck and shoulder, not on the face, of a Green Bay lineman.

As Rodgers was without his top three receivers for most of the game, Green Bay relied heavily on the run game. They rushed for 170 yards as a team averaging 5.9 yards per carry. Jamaal Williams stood out as he rushed for 104 yards on 14 carries while hauling in four receptions for 32 yards and a touchdown. In addition, he made arguably the smartest play of the night.

Despite a slow day as a whole, wide receiver Kenny Golladay had a big night for the Lions. He opened up the game with a 66-yard reception on a flea flicker and finished the game with 121 yards on five receptions.

The Lions (2-2-1) will look to get back on track as they welcome division rival Minnesota. Green Bay (5-1) will look to win their third straight game as they host the Oakland raiders. Both of those games are set for 1 pm Sunday.

Previous Keyontae Johnson: An Emerging Leader with a New Attitude
Next Hawthorne’s “Discipline” Leads to 24-8 Football Victory Over Williston in Make-Up Game