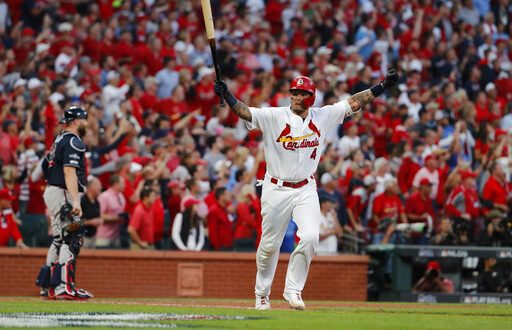 Farewell and till next year St. Louis Cardinals

The light at the end of the tunnel has turned to black and a farewell has been said to the Cardinals.

Last night, the St. Louis Cardinals came up short ending their season in the NL Championship Series to the Washington Nationals.

Their season in review? Let us take a look.

The Cardinals were on fire in the opening 30 games of the seaso. With a record of 20-10, they pulled up to Washington to face the Nationals. Their 2-1 loss that night resulted in a slow ten-game run resulting in 2-8. Losing steam, they turned it around with a 14 to 3 win against the Braves.

The last regular season game took to Busch Stadium III where the Cardinals destroyed the Cubs nine to zero finalizing their regular season record at 91-71. This win was the spark that helped carry them deep into the playoffs to end up facing the Nationals in the championship series. This put them with the fourth highest record in the NL with a win percentage of 56.2%.

Paul Goldschmidt, first baseman in his first season with the Cardinals, led the team in hits this season with 155. Crushing 34 homeruns, “Goldie” also came through leading the team with 97 RBI’s. He will be an asset in the success of next years Cardinals.

Dakota Hudson, the right-handed 6’5 pitcher, led the team with 16 wins on the season to his seven losses. He maintaining a 3.51 ERA pitching over 170 innings only in his second season in the MLB. He will also be an asset to watch for in the 2020 season.

In game one, the Cardinals threw Mile Mikolas. Pitching 6 innings, he only gave up one run in the second. The Cardinals were unable to get their bats cracking with only one hit on the day. The downfall allowed the Nationals to sneak by with a 2-0 win to start out the NL Championship Series.

In game two, the Nationals came up on top in a 3-1 win. Once again, they were unable to heat up their bats only having three hits on the game. Max Scherzer threw seven innings only giving up one hit to Goldschmidt in the bottom of the seventh.

In game three,  the comeback felt out of reach. Losing 8-1, the Cardinals left with little hope to regain control over the series. In contrast to the first two games, they did have seven hits but were unable to get the players around all four bases.

In game four, Washington came out scoring seven in the first inning. Not much of a return by the Cardinals as they watched their season come to an end.

Mike Shildt, the Cardinals manager, only had good words to say after their extermination of his team from the playoffs. After losing four straight games, he applauded the quality baseball they played.

The Cardinals open up the season in 2020 on Feb. 22nd for a two-game weekend series versus the Mets.

Hey! I am a telecommunications major with a specialization in video production. I aspire to film documentaries with extreme athletes traveling around the world.
Previous Emory Jones seeing more playing time
Next Missouri looks for third SEC win against Vanderbilt

The dreaded road trip is over. The Rays are back home and looking to get …