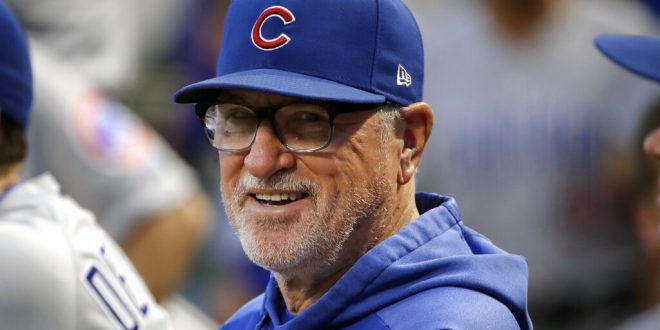 FILE - In this Sept. 25, 2019, file photo, then-Chicago Cubs manager Joe Maddon stands in the dugout before a baseball game against the Pittsburgh Pirates, in Pittsburgh. Joe Maddon has agreed to become the Los Angeles Angels' manager. Maddon and the Angels agreed to terms Wednesday, Oct. 16, 2019, on a deal to reunite the veteran manager with the organization where he spent the first three decades of his baseball career. (AP Photo/Gene J. Puskar, File)

The Los Angeles Angels were able to reel in the biggest fish in the lake.

They got Joe Maddon, previously the manager of the Chicago Cubs and Tampa Bay Rays, to come back to where it all began. He previously spent 31 years with the Angels organization, 12 in the major leagues. He even won a World Series with the team in 2002 as a bench coach.

It was announced Wednesday morning that Maddon had agreed to a three-year contract worth between $12 million and $15 million.

The move comes two weeks after the Angels fired former manager Brad Ausmus just one year into his three-year deal.

He got his first shot as a full-time manager in Tampa Bay, where he spent nine seasons (2006-2014). In just his third season, Maddon led the Rays to their first World Series appearance. The Rays made the playoffs three more times under his leadership (2010, 2011, 2013).

In 2015, Maddon joined the Chicago Cubs and was determined to break a 107-year long World Series drought. The Cubs would go to the NLCS in that first season under Maddon, but fell short, losing to the New York Mets. The drought wouldn’t make it past year 108 though, as Maddon and the Cubs captured a World Series championship in 2016.

He now comes to a team that has talent. Unfortunately, it hasn’t been properly utilized in years past. The Angels finished with a 72-90 record in 2019, their first season with 90 or more losses since 1999. On the roster though is a regular MVP candidate in Mike Trout, along with talented players Albert Pujols and Shohei Ohtani.

The cup isn’t bare, and it will be up to Maddon to once again get the most out of the roster he’s been given. Can he recreate the magic that made his time in Tampa and Chicago so successful?

If history tells us anything, a second ring in Los Angeles could be in his future.

Previous Chiefs and Broncos Renew Rivalry on Thursday Night Football
Next No. 11 Auburn aims to readjust in visit to Arkansas