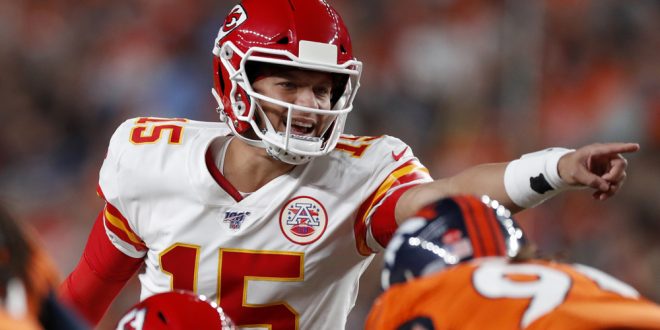 Kansas City Chiefs quarterback Patrick Mahomes (15) makes a call during the first half of an NFL football game against the Denver Broncos, Thursday, Oct. 17, 2019, in Denver. (AP Photo/David Zalubowski)

The win almost seemed easy for the Chiefs despite losing their star quarterback Patrick Mahomes in the second quarter to a knee injury.

The Denver Broncos offense wasn’t near where it needed to be to beat the Chiefs as Broncos quarterback Joe Flacco struggled to get the ball out of the pocket.

Give credit where credit is due, and that goes to the Chiefs’ defense for stepping up when their quarterback fell to his knee injury. They weren’t afraid to put pressure on Flacco throughout the game.

For instance, linebacker Anthony Hitchens sacked Flacco forcing a fumble on the play. The ball was quickly recovered by linebacker Reggie Ragland and ran into the endzone for the second touchdown of the game. This would also be Ragland’s first-ever career touchdown.

When it was over, the defense had nine sacks and three forced fumbles, keeping the Broncos to just 205 yards.

Broncos Struggle To Move the Ball

The KC defense dominated the poor Broncos offense. Denver was off to a good start with a 10-play, 75-yard touchdown drive putting themselves first on the board. However, it failed to deliver the rest of the game.

With a total of 205 yards, 134 passing and 71 rushing, the average yards per play was 3.2 for the Broncos. They also struggled to convert at third downs, only being 1-13, last night.

The result from the poor performance was seven punts, two turnovers on downs, a fumble, a missed field goal, and a fake punt attempt. This being Week 7, it may be time for the Broncos to reconsider their strategy on the field.

The third-year quarterback caused worries online Thursday evening when he laid on the turf in clear pain.

It was unclear as to what the injury was until news came later that Mahomes has suffered a knee injury. From the MRI update this morning, he’s expected to be out at least three weeks.

Mahomes had these words to offer for his team and fans:

Awesome team win! Love my brothers! Thank you for all the prayers! Everything looking good so far! #GodisGood #ChiefsKingdom

Due to the injury, backup quarterback Matt Moore had to live up to the KC expectations. It was no strong night for the backup, but a big play showed Chiefs fans what Moore was capable of.

The quarterback threw a 57-yard touchdown pass to wide receiver Tyreek Hill, putting another six on the board for the Chiefs.

The Chiefs remain at the top of the AFC West. They will face the Green Bay Packers in Week 8 for Sunday Night Football. Meanwhile, the Broncos, are at the bottom of the division and will face the Colts in Indianapolis.

I am a fifth-year journalism major, specializing in sports and media. My favorite sport to watch and cover are college and NFL football. When I'm not doing that, I enjoy hanging out with my cat, going to concerts and traveling.
@sportsabrina
Previous Astros put Yankees on brink of elimination in ALCS
Next Gators look to assert their dominance over Auburn