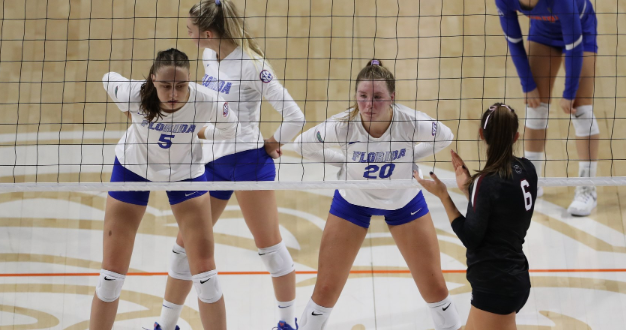 Gators in the Bayou for Match with Tigers

The No. 13 Florida Gators volleyball team heads to the Louisiana capital for a Sunday afternoon match with the LSU Tigers.

The Gators lead the all-time series 44-13 including a 41-5 mark under Mary Wise. The Gators swept LSU in the O’Dome in their last meeting in 2018.

LSU enters the match fresh off a 3-1 home victory over the Alabama Crimson Tide. They hit .234 as a team, limited the Tide to a .167 clip and posted 11 blocks.

The Tigers are currently hitting .267 against SEC opponents and allow .183 overall this season. Plus, they average over two blocks per set.

Head Coach Fran Flory’s team is led offensively by junior middle blocker Taylor Bannister. She is first on the team with 252 kills, 3.88 kills/set and has nearly 600 total attempts.

Additionally, Bannister is one of seven players with 1,000 career kills by her junior season and she has over five kills per set against conference teams.

Another offensive player to keep an eye on is freshman setter Karli Rose. She earned SEC Setter of the Week honors and has three straight double-doubles entering the match.

Junior defensive specialist Raigen Cianciulli is top three among SEC players in digs with nearly five digs per set against SEC teams. She posted a season-high 28 against the Tide.

Thayer Hall made an impact all over the stat sheet this season. She is in the top 10 in multiple major categories:

Also, she has a double-double in four of her last five matches.

Catch up with @laurennnnn25 after tonight's win over South Carolina! #GoGators pic.twitter.com/KDeDVlUKNf

The Gators have seen the emergence of sophomore middle blocker Lauren Dooley this season. In just her short time getting major minutes she is second in the league with 1.28 blocks per set.

Florida volleyball has an opportunity to do what Florida football couldn’t, go to the Louisiana bayou and leave it with a win.

The match can be seen on SEC Network+ at 2 p.m. Eastern Time.