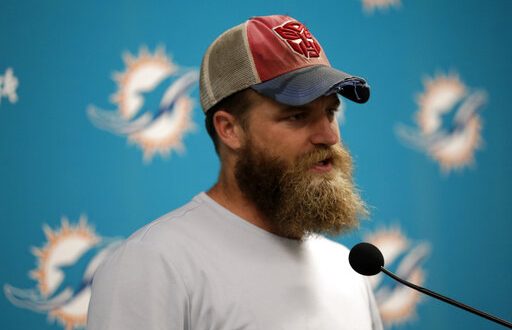 Ryan Fitzpatrick and the Miami Dolphins (0-6) looked better on Sunday afternoon in their 31-21 loss to the Buffalo Bills (5-1). Nonetheless, the Dolphins failed to capitalize on their best start to a game this season.

Things started clicking for the Phins in the second quarter after going down 6-0 in the first.

Running back Kalen Ballage finished an eight-play drive for 75 yards with a three yard run.

The traveling team had a lead for the second time this season. But  the home side came back to reclaim it with its third field goal making it a 9-7 game with ten minutes left on the half.

Fitzpatrick connected well using wide receivers Preston Williams and Albert Wilson as outlets to gain serious yardage. And to finish the drive off, Fitzpatrick tossed the ball to DeVante Parker who broke a tackle and landed in the end-zone.

The Dolphins led at the half for the first time in the entirety of the season, 14-9.

At halftime, social media was doing its job in keeping people entertained.

After a series of Fitzmagic passing and running plays, and a faked field goal attempt, the Dolphins found themselves at the 3-yard hash. But a former Dolphin, Jordan Phillips, sacked the Arizona native relocating the Phins on the 12-yard line.

As a result, Cornerback Tre’Davious White intercepted a pass in the end zone igniting the away team’s demise.

Josh Allen threw his first touchdown of the afternoon to John Brown with 14 minutes left on the later quarter. Allen followed-up the scoring play with a rushing two-point conversion to expand the lead, 17-14.

Williams, who was Fitzpatrick’s favorite receiver on the day, fumbled when tackled in his own 30. In return, It would only take Allen and the Bills three plays and 16 yards to make it a 10 point game.

You have to give it to Fitzpatrick. He never let down.

A magical and improvised 16th career rushing touchdown would get the bearded QB and the Dolphins one last chance to even-out the game. But Micah Hyde killed all hopes intanteneously by scoring on onside kick return. The game ended at 31-21.

Despite a sixth loss, the Dolphins and some of the players achieved some season highs.

Figuring out a plan to make it big in the soccer scene in the U.S. or anywhere else in the world. For now, I'm having a blast writing for ESPN Gainesville and learning a lot from managers and students around the workplace. I'm covering the TV beat for Gators Soccer. What a team! Follow me on twitter: @J_AguerrevereUF
@@J_AguerrevereUF
Previous Gators in the Bayou for Match with Tigers
Next Gators Sweep LSU Behind Hall and Carlton