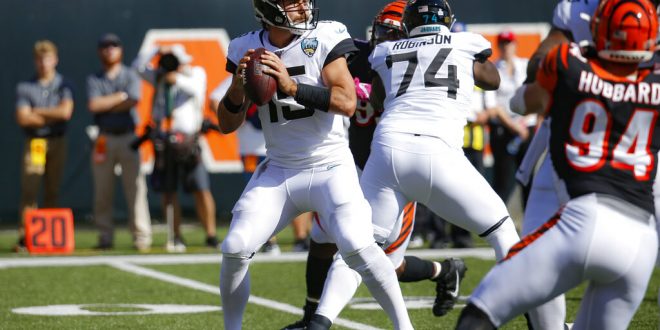 Jacksonville Jaguars quarterback Gardner Minshew (15) looks to pass in the first half of an NFL football game against the Cincinnati Bengals, Sunday, Oct. 20, 2019, in Cincinnati. (AP Photo/Frank Victores)

No Ramsey. No Problem.

During this past week, Jacksonville traded star cornerback Jalen Ramsey to the Los Angeles Rams. In return, the Jaguars received three draft picks in this blockbuster trade. Entering Week 7 of the NFL, questions were raised about how the Jaguars defense would play without their feared defensive back.

Without Ramsey, the Jaguars beat the Cincinnati Bengals 27-17 to secure a much needed win.

FINAL: The @Jaguars force 4 turnovers and come away with the win in Cincinnati! #JAXvsCIN pic.twitter.com/vEXhFmoqKk

The Jaguar defense overcame expectations racking up two sacks and three interceptions. Late in the fourth quarter, Defensive end Yannick Ngakoue came up big defensively with a 23-yard interception return for a touchdown to seal the victory.

Entering Week 7, the Bengals were desperately seeking their first win of the season.

Following a scoreless first quarter, Andy Dalton connected with Joe Mixon for 2-yard touchdown. The Bengals took a lead 7-3 late in the second quarter. At end of third quarter, the Bengals again retook the lead 10-9. This was courtesy of a Randy Bullock field goal with 31 seconds left in the third quarter.

Aside from just having beautiful mustache, Jaguars quarterback Garner Minshew has been on a tear in the 2019 NFL season after taking over for injured quarterback Nick Foles.

Gardner Minshew, we are not worthy. (via @Jaguars) pic.twitter.com/zkkjwRgkB4

Minshew shined in Sunday’s game with a clutch drive to open up the fourth quarter. The drive ended with a two-yard touchdown pass to Keelan Cole. To cap off the drive, Minshew completed a two-point conversion to Chris Conley to take 17-10 lead over Bengals.

With the victory over the Bengals, the Jaguars move to 3-4 on the season and are sitting in third place in a talented AFC South. The Jaguars will prepare to host the New York Jets this Sunday for an important AFC Matchup.

After the game, Jacksonville head coach Dough Marrone comments on the Jaguars’ plans for the upcoming week.

Previous Lamar Jackson is more than a ‘running back’
Next Monday Night Football: Patriots Face Jets in AFC East Clash