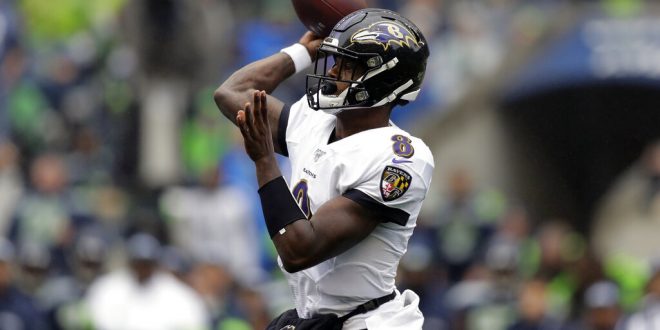 Baltimore Ravens quarterback Lamar Jackson passes against the Seattle Seahawks during the first half of an NFL football game, Sunday, Oct. 20, 2019, in Seattle. (AP Photo/John Froschauer)

Lamar Jackson is more than a ‘running back’

Lamar Jackson has outgained eight NFL franchises this season on the ground. The Ravens quarterback has thrown for more passing yards than more than half the league. The so-called “running back,” which entered the NFL just a year ago, is already proving he’s a legitimate force under center and the league should take notice.

Jackson by the numbers

The 6-foot-2, 22-year-old quarterback has steered the ship in the right direction for the Baltimore Ravens in 2019 thus far. Standing tall with a 5-2 record, the Baltimore offense and Jackson have been one the most-talked about storylines of the NFL season.

The Ravens are second in the NFL in total yards and sit just three yards per game short of passing the Cowboys for the NFL’s most electric offense. They lead the league in rushing by more than 300 yards and the gap between them and the sixth-ranked Texans is as great as the gap between Houston and the No. 26-ranked Pittsburgh Steelers. Similarly, Jackson’s averaging a whopping 6.9 yards per carry, while also notching an average of 235.7 yards per game through the air.

Ravens head coach John Harbaugh says they knew his potential through the air when they drafted him. They also knew it would take time, but maybe not this quickly.

Perhaps every great NFL quarterback has that aching desire to do whatever it takes to win. Lamar Jackson is no different, and in Seattle on Sunday afternoon Jackson’s desire changed the game in Baltimore’s favor.

The scene was fourth-and-two on the 8-yard line. With about 17 minutes remaining, the Seahawks and Baltimore were tied at 13. The Ravens were stopped on third down and Harbaugh sent  Justin Tucker and the special teams group out to take the 16-13 lead. Jackson came back to the sidelines not too happy.

That trust to have in your 22-year-old, second-year quarterback is remarkable. Harbaugh called the timeout and sent Jackson back out on the field in the deadlocked game. Taking advantage of Jackson’s speed, Harbaugh and offensive coordinator Greg Roman called a designed quarterback power run. He was untouched as he picked up the first down. He switched to high gear to accelerate into the endzone for a six-point lead. The Ravens didn’t relinquish it for the rest of the day either, leading to the 30-16 rout of Seattle on the road and Baltimore’s fifth win of the season.