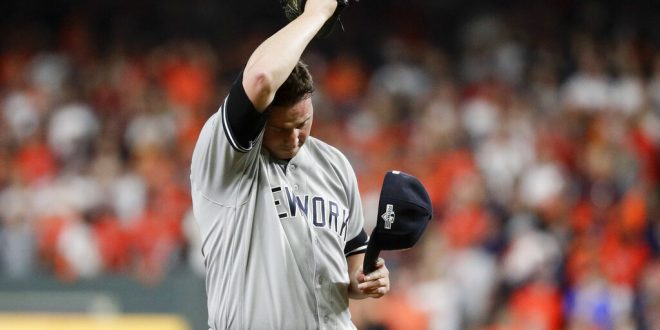 Yankees Leave Room for Improvement After ALCS Loss to Astros

The New York Yankees offseason will be one of reflection. Their loss to the Houston Astros marks the first decade since 1910 where New York misses a World Series. Despite a thrilling comeback to almost tie the series, the Yankees fell short in Game 6. A walk-off two-run home run to Jose Altuve from Aroldis Chapman sent the Astros to the World Series and New York packing.

Aaron Judge believes that although the Yankees put up a great season – which they did – it ended in failure.

During the off-season, the Yankees have a lot of thinking to do. New York has many legitimate issues it needs to answer for. Its pitching situation, recognition of talent, and injury management all need to be addressed.

The Yankees placed a burden on the bullpen early in the series. Starting pitching was not necessarily the biggest problem, but it was certainly a major factor. Relief pitching becomes more of a liability for a team as games go on. A fatigued relief pitcher can slow a team’s offense, often by familiarizing an opponent with their style. This is why starting pitching is so important. The Astros relied on Justin Verlander and Zack Greinke. It’s possible a relief lineup like Chapman, Zack Britton, and Chad Green just don’t stack up to the likes of Verlander and former Yank, Gerrit Cole. Looking forward, the Yankees should consider more starting pitcher help. The help they need may be available soon, with pitchers like Strasburg and Wheeler possibly going on the market.

It’s important for any organization to recognize its talent. It’s especially important to hold onto your strongest assets in the midst of an injury crisis. This is why the Yankees need to recognize the talent that makes up its team and how they can keep them. The Yanks pushed through multiple injuries to make a 103-win season but still fell short in an important area.

Take DJ LaMahieu for example. His contract will run out at the end of the 2020 season, but it’s apparent that he’s a valuable addition to the team. He has accuracy and power in his hits, plays well on the field, and thankfully avoided injury. New York needs to seriously take resigning LaMahieu into consideration and avoid the open market. His skills are invaluable to the team and should be sought in every future candidate.

Speaking of open market free agents, Didi Gregorius is still not locked in to return next season.

“I don’t even know where I’m going to be at,” Gregorius said. “So, who knows what’s going to happen now.”

Not exactly something you want to hear from your power-lefty if you’re the Yankees. The short-stop role could be filled, granted, but at the expense of some defense. Gleyber Torres can pick up the mantle left by Gregorius, making for still an aggressive infield. The Yankees will have to consider how much they value left-handed power players, starting with Gregorius.

New York put on a good show this season, but a show that was characterized by a litter of simple mistakes. Wasted possibilities in the ALCS, notably blowing their lead in Game 2, resulted in their departure from World Series hopes. They made numerous wastes of rallies in Game 6, failing to capitalize on strong plays. Wastes that cost them an otherwise playoff-worthy season.