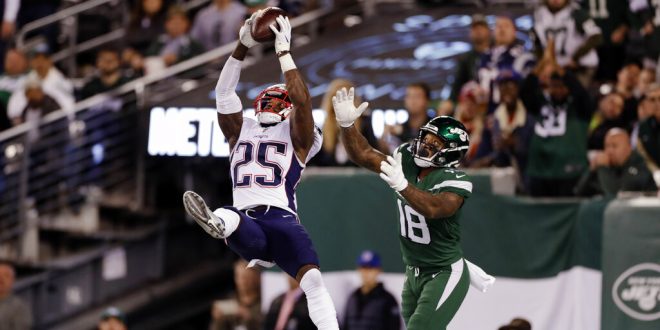 Patriots Shut Out Jets on MNF

The New England Patriots defeated the New York Jets 33-0 on Monday night as they improve to 7-0.

Tom Brady and the offense set the tone early in the game for the Patriots as the defense smothered the Jets throughout. New England’s defense was stout forcing six turnovers on the night.

The Patriots jumped out to an early lead with a Sony Michel rushing touchdown. Michel had a big day as he found the end zone three times. New England dominated in the trenches and that showed all game. Listen to what Head Coach Bill Belichick had to say about his team’s overall performance:

Darnold finished the game 11/32 passing with 86 passing yards, four interceptions and a passer rating of 3.6. Darnold was wearing a microphone during the game and was caught on the sideline saying “I’m seeing ghosts.” Darnold commented on his performance after the game.

New England allows a league-best 223.1 yards per game while allowing just 6.9 points per game. In addition, they lead the league in forced turnovers with 22 — seven higher than the second-best team.

Week 8 of the NFL season carries on as the Minnesota Vikings host the Washington Redskins this Thursday night. The Jets will look to bounce back as they travel to Jacksonville to take on the Jaguars. The Patriots host the Cleveland Browns as New England looks to keep its perfect season going.