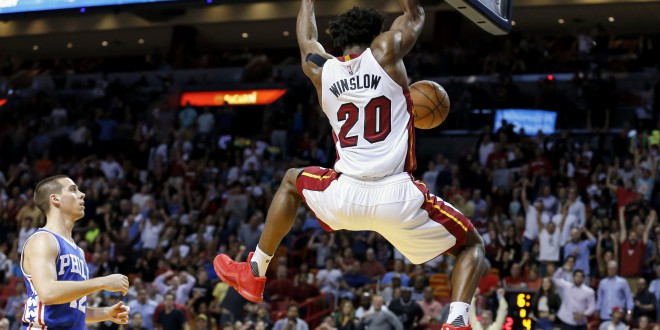 The Miami Heat will open their season with their new bolstered team against the Memphis Grizzlies on Wednesday.

While last season for the Heat will forever be remembered as Dwayne Wade’s “One Last Dance,” it was also about the development of key players. Justice Winslow, Derrick Jones Jr. and Bam Adebayo will have to do something special to make the playoffs for a second straight year.

The Miami Heat can not fall into the hole they found themselves in at the beginning of the season last year.

It was not until half way through the season that Winslow, Adebayo and Jones Jr. started to flourish. Winslow really developed a lot more versatility in his offensive game and gained more confidence overall as a player. In addition, he excelled as point guard after Goran Dragic suffered a right knee injury and had a career-high nine assists game against the Clippers on December 8th.

Jones Jr. was also a great asset for Miami with his outstanding ability in rebounding giving the team multiple second chances to score throughout last season. Miami went 39-43 overall in the 2018-2019 season while going 19-22 at home.

In addition to these three stellar players, Miami also picked up a new star Jimmy Butler and rookie Tyler Herro. The Heat have been in the top seven in defensive efficiency for the last three seasons. However, having Butler combined with other pieces on the roster such as Bam Adebayo, Justice Winslow and James Johnson make this team a threat to other teams defensively.

Miami offers a great competitive season with its current line up.

#MEMvsMIA INJURY UPDATE: Udonis Haslem (wrist) participated in today's team shootaround but will not play in tonight's game vs the Grizzlies.

All other players will be available tonight except Dion Waiters (suspension) & James Johnson (conditioning).

Miami has an advantage to win tonight with key players from the Memphis Grizzlies not playing in the first game. Josh Jackson and Andre Iguodala both are battling injuries.

Tip off is set for Wednesday starting at 7:30 p.m.