The Orlando Magic kicked off the 2019-20 season with a 94-85 win at home against the Cleveland Cavaliers Wednesday night. The team went 3-3 in preseason games earlier in October. 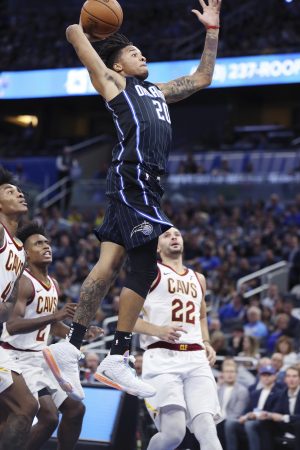 Last season, the Magic managed to win the Southeast Division and ended first in defensive rating. This showed through the 39 defensive rebounds against the Cavs. The Magic also had 12 steals and four blocks, compared to the eight steals and two blocks that Cleveland had.

Statistically, this was a close match-up. If the Cavaliers were more accurate on just a few of their 3-pointers, they would have won this game, but only by a few points. This was a very defensive game, with both teams making less than half their field goals and less than a third of their 3-pointers. Both teams need to work on their offense and capitalizing on scoring opportunities to get their percentages up if they want to do better than last season and make a name for their cities this year.

Cleveland head coach John Beilein said he hoped to see skills and tactics from practice translate into this first game.

It’s safe to say these defensive practices showed against the Magic. The Cavaliers had 44 defensive rebounds, compared to the Magic’s 39. They only allowed Orlando’s offense to snatch seven offensive rebounds all game.

Orlando center Nikola Vucevic started his eighth season with the Magic by leading the team with 21 points and he also led the defense with eight defensive rebounds, a steal and no fouls. Terrence Ross, Aaron Gordon and Markelle Fultz all had two steals each, proving the Magic defense to be solid like last season.

The fact that Fultz also led the Magic with six assists shows that he could be a big threat to teams if he can capitalize on quick ball movement after forced turnovers.

Fultz is still young to the NBA and this is his first full season with Orlando. He could be a big help on converting turnovers to scoring opportunities if he can be smart with the ball. He scored 12 points in just 23 minutes of play time, but he also had three turnovers. Losing the ball at essential times can be the downfall of Fultz, but with more confidence and experience with his new teammates, he could start leading his team in points and assists per game.

Tristan Thompson carried his team with 16 points, 11 rebounds and a block, but it wasn’t enough to get the win. If players like Kevin Love, who had 11 points and 17 rebounds, and Larry Nance Jr., who had 9 points and 14 rebounds, can step up and make more shots, Thompson wouldn’t be the only player Cleveland can rely on to make offensive plays.

On Saturday, the Magic will head to Atlanta to play the 0-1 Hawks, while the Cavaliers host the 0-1 Indiana Pacers.

Both teams have an opportunity to prove their worth to the NBA this season and both showed improvements on Wednesday compared to last season in defensive statistics, including steals and defensive rebounds.

Previous Texas A&M looks to snap losing streak ahead of Mississippi State
Next No. 20 Gators Travel to Tennessee