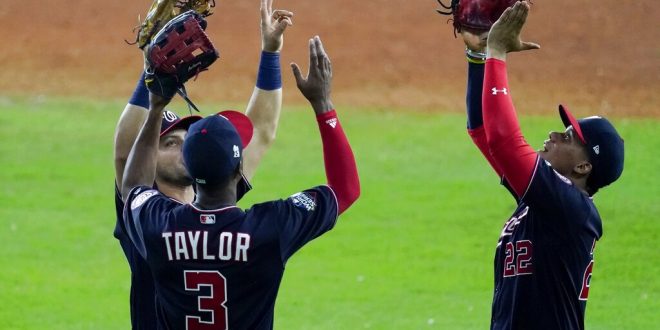 Washington Nationals' Gerardo Parra, Michael A. Taylor and Juan Soto celebrate after Game 2 of the baseball World Series against the Houston Astros Thursday, Oct. 24, 2019, in Houston. The Nationals won 12-3 to take a 2-0 lead in the series. (AP Photo/Eric Gay)

The Washington Nationals are off to a dream start in the fall classic.

With Gerrit Cole and Justin Verlander starting Game 1 and 2 for the Houston Astros, Washington would probably have been satisfied with one win. The Nationals showed why they are the hottest team in baseball defeating the Astros 12-3 in Game 2. Washington now takes a 2-0 series lead with the next three games of the series being played in the nation’s capital.

It was a complete domination by the Nationals on Wednesday night.

Washington never trailed in Game 2. They wasted no time scoring two runs on Justin Verlander in the first inning. Anthon Rendon hit an RBI-double to left field to add to his memorable postseason. The game was actually tied at two before Washington broke out for six runs in the seventh inning.

Kurt Suzuki started it off with a leadoff solo home run to left field and the Nationals never looked back. In total, Washington scored four runs on six hits and an error. The runs would not cease as they scored four more runs over the course of the next two innings.

Houston, We Have A Problem

The Astros were the favorites heading into the series but now have their backs against the wall.

They took a big leap in trading for Zack Grienke at the trade deadline and will need it to pay off on Friday night in Game 3. So far, Grienke has been everything but effective. The lefty has given up a total of 10 earned runs in his two postseason starts. On the other hand, the Nationals are using Anibal Sanchez who has been magical in October. Sanchez held the Los Angeles Dodgers to one run in five innings of work and then threw 7.2 innings of shutout ball against the Cardinals in the NLCS.

Not only are the Nationals on fire but now history is on their side too. Teams that take a 2-0 lead in the World Series have won 23 out of the last 26 times. The series resumes on Friday in Washington D.C. The first pitch is at 8:07 pm.

The Washington Nationals have been the best team in @MLB since May 24.#WorldSeries // #STAYINTHEFIGHT pic.twitter.com/AB5WO6krsQ

Previous No. 20 Gators Travel to Tennessee
Next Heat Pull Away from Grizzlies in Butler’s Absence to Open 2019