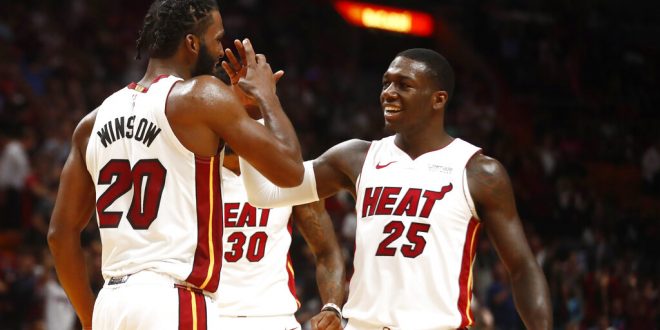 Miami Heat guard Kendrick Nunn (25) congratulates forward Justise Winslow (20) after a basket during the second half of the team's NBA basketball game against the Memphis Grizzlies on Wednesday, Oct. 23, 2019, in Miami. (AP Photo/Brynn Anderson)

No Jimmy Butler, no problem.

Miami’s newly cherished signing was inactive for the Heat’s first regular contest, but that didn’t hinder them too much in their season opener against the Memphis Grizzlies.

While Butler’s Heat debut will be delayed until at the very least Saturday, Erik Spoelstra’s team indeed got their season rolling on schedule. Miami routed Memphis 120-101 as they used a 24-1 run in the fourth quarter to secure a home victory.

There’s little question that Heat fans were shocked as to the rather peculiar nature of Butler’s absence.

Spoelstra spoke briefly about Butler’s situation prior to tip-off.

Essentially, youth triumphed for Spoelstra and the Heat on Wednesday night.

Some of the anticipated excitement for Wednesday’s game was undoubtedly stripped from Heat fans when it was announced that Butler would be inactive due to “personal reasons.”

Regardless, the crowd didn’t have to wait long to see something they hadn’t before. Herro scored the first points of Miami’s season with a soft floater off the glass. On Wednesday he also became the youngest player to ever start a regular-season game for Miami (19 years and 276 days old).

The final scoreline will flatter the Heat, yet in actuality, the Grizzlies hung around for much of the game. It wasn’t until the fourth quarter that Miami would outscore Memphis by 20. Nunn scored 11 of his 24 points in the game’s final quarter.

“I don’t know how to explain it. Kendrick, I’ve never seen him look like he’s ever under stress, or anxiety or pressure. That’s going back to preparing for summer league, and summer league,” Spoelstra said after the game. “He’s got a mature game and a mature disposition about him.”

Spoelstra’s team also held the Grizzlies to just 15 percent from the three-point line (5 for 32). That, along with Miami’s own shooting, helped Miami overcome 21 turnovers in their season opener.

The other unpleasant news that Miami received on Wednesday revolved around guard Dion Waiters and his suspension. Miami suspended Waiters this week for conduct detrimental to the team.

The Heat have cited a number of “unacceptable incidents” that occurred this week involving Waiters for his suspension.

Waiters is still owed $27.5 million dollars on his contract, but he’s seemingly disgruntled with Spoelstra and the current Heat team. Miami now turns their attention to their second game of the season — a road match up with the Milwaukee Bucks on Saturday.

The likelihood of Waiters rejoining the Heat for that one is quite low, however, Jimmy Butler’s odds are likely much higher.

Tip-off for Miami’s next contest is set for 5 p.m. from the Fiserv Forum.