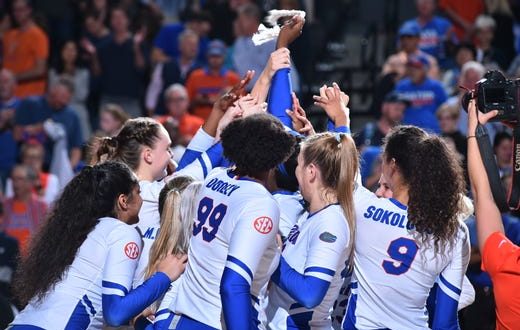 And on Sunday afternoon, Florida will return to the court and host the Tennessee Volunteers.

The Gators (15-3), (6-1) in the SEC, have been a strong defensive presence at the net. Florida currently leads the SEC in blocks with a team total of 73 blocks on the season.

A Look at Florida

The Florida middle blockers, Rachel Kramer and Lauren Dooley, have been defensive leaders for the Gators. Dooley leads the Gators with a total 66 blocks on the season.

In addition, Kramer adds another 50 blocks on the season for the Florida defense.

Libero Allie Gregory leads the Gators back court with 271 digs on the season. This past week Gregory was named the SEC Defensive Player of the Week.

Offensively, outside hitter Thayer Hall leads the Gators in total kills on the season. Hall records a total 243 kills and averages 3.96 kills per set.

Furthermore, the right side hitter Holly Carlton also leads the Gators offense with a total 152 kills on the season. Carlton ranks fourth in the SEC in kill percentage with .345.

The Alabama Crimson Tide (11-7) hold a strong defensive back court. The Tide currently lead the SEC in digs, averaging 15.59 digs per set.

Libero Kaylee Thomas currently ranks third in the SEC for digs per set, 4.70.

At the net, Alabama’s Hayley McSparin has been both an offensive and defensive leader.

McSparin records 129 kills and 50 blocks on the season.

#DYK Hayley McSparin's next block will put her in the top-10 for career total blocks at Alabama … she would be just the 5th player in UA history to rank in the top 10 in total blocks, block assists, solo blocks and hitting percentage#BamaVB #RollTide pic.twitter.com/H2jW1dZ2sF

The Tennessee Volunteers (9-9) look to bounce back from back-to-back losses to ranked opponents.

The Volunteers fell to No. 16 Kentucky and No. 25 Missouri this past week.

Defensively, the Volunteers rank second in the SEC for total digs, averaging 15.16 digs per set. Madison Coulter leads Tennessee with a total 295 digs on the season.

Offensively, Tennessee is led by outside hitter Tessa Grubbs. Grubbs leads the Volunteers in kills and ranks seventh in the SEC in kills, 284.