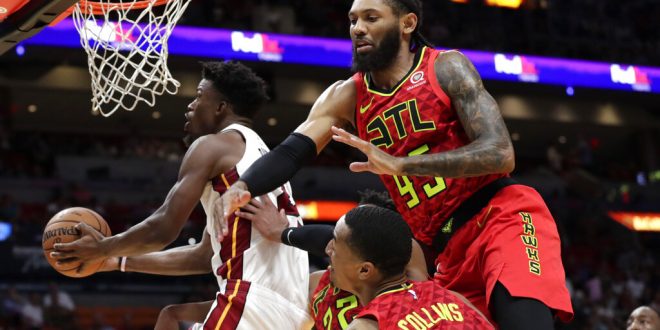 Herro shines for Heat as Young goes down

The Miami Heat have started its season strong after its third win in its first four games of the 2019-2020 season. Miami handily defeated the Atlanta Hawks 112-97 Tuesday night in downtown Miami behind performances from Tyler Herro and Jimmy Butler.

One of the most significant moves of the offseason came when small forward Jimmy Butler was traded from the Philadelphia 76ers to the Heat in a four-team deal back in June. His debut for Miami has been highly anticipated. He missed the first three games of the season due to the birth of his daughter.

Jimmy Butler’s baby daughter Rylee – pronounces like Riley – arrived a little over a week late. He thinks she came on opening day to show him what’s really important. pic.twitter.com/62f5wasY8R

In his debut, Butler finished with 21 points on five for 11 shooting to go along with his five rebounds and three steals. However, the leading scorer for the Heat was not the coveted wing player.

Herro, the 13th overall pick in the 2019 draft, led the Heat in scoring Tuesday. He logged 29 points (including a 19-point second quarter). The shooting guard out of Kentucky made his presence known from distance as well. He knocked down three of his four attempts from the three-point line.

Even though the rookie played in just the fourth game of his career, he has already put himself in elite company. Herro is only the second rookie since Dwayne Wade to score 29 points for the Heat in the team’s history.

Besides the loss itself, the Hawks lost its young star for an unknown period of time. Point guard Trae Young came down awkward on his right ankle in the second quarter and led people to assume the worst as the second-year player writhed in pain on the hardwood.

Young later posted on Instagram he would “be back soon.” The initial diagnosis was that his was a sprained ankle but Young will get an MRI done on Wednesday to be sure. Power forward John Collins stepped up in Young’s absence for the Hawks and contributed 30 points in the losing effort.

The Hawks will have achance at payback Thursday at 7 p.m. when the Heat travel to Atlanta on TNT.