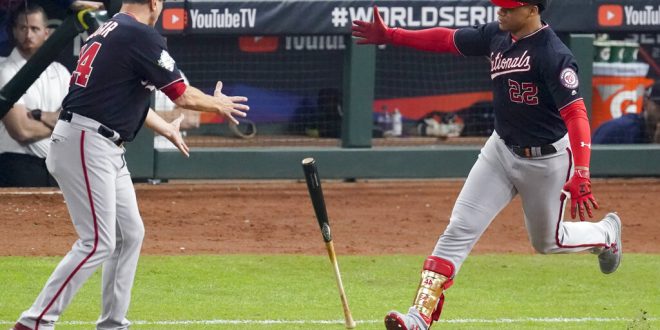 Washington Nationals' Juan Soto tosses his bat to first base coach Tim Bogar after his home run against the Houston Astros during the fifth inning of Game 6 of the baseball World Series Tuesday, Oct. 29, 2019, in Houston. (AP Photo/Eric Gay)

The Washington Nationals force a deciding Game 7 in the World Series with a wild 7-2 win over the Houston Astros in Houston on Tuesday night.  Game 7 will be played Wednesday night in Houston.

Facing elimination, the Nationals pulled through to keep their season alive.  After the first inning, Houston was up 2-1 and the momentum was in their favor. Alex Bregman was getting MVP chants as he helped advance his team with a home run.

HAVE A SERIES BREGMAN!

Astros have the lead!! pic.twitter.com/E31jam4aXk

With their backs against the wall, it wasn’t until the fifth inning when the Nationals tied the game on an Adam Eaton solo home run. They then claimed the lead behind Juan Soto’s blast to right field to give them a 3-2 advantage.

The middle of the seventh inning is when things really opened up as Anthony Rendon hit a two run homer to push the Nationals to a 5-2 lead. It was also during that seventh inning that Washington manager Dave Martinez was ejected from the game for arguing a judgement call at first base when Trea Turner was called out for interference.  Martinez became the first manager to be ejected in a World Series game since 1996.  Despite the call, the Nationals sealed with win in the ninth inning when Adam Eaton hit a two run double off pitcher Chris Devenski.

After scoring just three runs in their three losses at home, Washington will attempt to be the first team to win a World Series without winning a game at home.

As for Houston, they look to finish things off on their own turf. They’ve won 100 games three seasons in a row and have entered the World Series as the biggest betting favorite since 2007.

The starting pitchers for tonight’s match up are Max Scherzer for the Nationals and Zack Greinke for the Astros. This will also be the first Game 7 in a World Series where both starters already have won a Cy Young award.