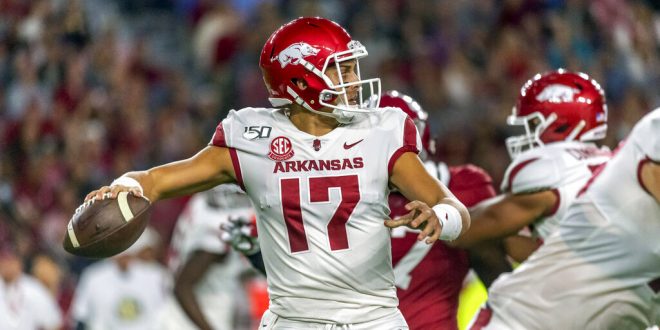 Arkansas quarterback Nick Starkel (17) throws against Alabama during the first half of an NCAA college football game, Saturday, Oct. 26, 2019, in Tuscaloosa, Ala. (AP Photo/Vasha Hunt)

The last 16 SEC games have taken a toll on Arkansas.

The school record for the longest SEC losing streak is only one loss away. The Razorbacks lost 17 in a row between 2012 and 2014 under John Smith and Bret Bielema.

But Saturday’s matchup with Mississippi State presents arguably Arkansas’ best opportunity to snap the losing streak. The Bulldogs come into this game with four straight losses in SEC play and a 2-5 overall record. The loser sinks to the bottom of the SEC West.

Neither team is feeling super comfortable with its passing game entering this matchup.

SMU transfer Ben Hicks and junior Nick Starkel have split time under center and have been relatively effective. Arkansas sits seventh in the conference in passing yards per game.

But against Auburn and Alabama, the offense struggled, scoring only 17 points across the two games. Hicks started against Auburn, but only completed 19 of his 39 passes for 182 yards, one touchdown and an interception. Hicks also picked up an injury during the game, allowing Starkel to start against Alabama.

Starkel started against Alabama, and he fared even worse. The junior completed a measly five passes on 19 attempts for 58 yards and three picks. The expectation is that Hicks will start against Mississippi State.

Mississippi State has also seen its fair share of struggles this season. Freshman Garrett Shrader has been inconsistent, and junior Tommy Stevens has also seen time under center. Between the two quarterbacks, though, the team is 12th in the SEC in passing yards per game (192.1).

Both teams will likely need to rely on their running game on Saturday, which is a huge advantage for Mississippi State. Kylin Hill is one of the best running backs in the conference, and the Bulldogs are fifth in the conference in rushing yards per game (186.6).

The good news for both offenses is that neither defense is particularly stout. The Razorbacks are next-to-last in the SEC in total yards allowed per game and rushing yards per game.

Mississippi State and Arkansas are also 13th and 14th in points allowed per game, respectively. An early lead will benefit Mississippi State, as it gives the Bulldogs more freedom to tear apart Arkansas’ porous run defense and burn clock.

But if Arkansas can force Mississippi State into more passing situations and limit the damage that Hill inflicts, Arkansas can prevent the 16-game losing from turning into a 17-game losing streak.

In a matchup where both coaches are on the hot seat after disappointing seasons, the difference may lie in the defense.