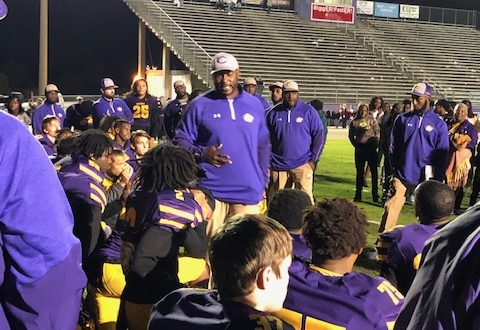 After ending a two-game skid last week against Middleburg, the Columbia High Tigers were looking to close out the regular season on a positive note, as they hosted the North Marion Colts on Homecoming/Senior Night in football action.

It didn’t take long for both teams to get their offenses in a groove. The Colts found themselves in the end zone in less than three minutes after junior Jyron “Papa”Gilmore took a reverse sweep in for a touchdown to put North Marion up 6-0 early on.

On the ensuing drive, the Tigers’ offense punched the Colts right back. Once inside the North Marion red zone, Columbia quarterback Jordan Smith connected with wide receiver Marquez Bell for a touchdown to give the Tigers a 7-6 lead with 5:33 left in the first quarter.

This, however, would be Columbia’s only lead on the night. After matching each other from the start, the turning point in the game came early second quarter with the Tigers trailing, 20-13.

Smith found himself scrambling after being pressured by the Colts’ defense and tried to float a ball out of the back of the end zone, but it ended up being an interception. This turnover would go on to be crucial, as North Marion was able to go down the field and strike for a touchdown on the ensuing drive.

After a successful two point conversion, the Colts now had the lead, 28-13.

In the first half of the season, the Tigers’ defense wasn’t squandering many points or yards to opponents. And it actually played a big role in a few of their early season victories.

But over the course of the last few weeks, due to the injury bug beginning to finally catch up with the Tigers, this unit has struggled to contain the rushing attack of opponents. This was the case once again on Friday night, as the Colts were able to run up and down the field.

One of the main contributors to North Marion’s ground attack was sophomore running back Ed Williams, who rushed for four touchdowns on the evening.

“We gotta go into our scheme and see where the things are we can help them (players) more,” Columbia head coach Brian Allen said when referring to things that could possibly be fixed on this of the ball heading into the postseason.

Nearly all of the Colts’ points scored were via the run. The only passing touchdown in the game came at a critical time for North Marion around mid-fourth quarter.

With the Tigers’ defense needing to make a stand on fourth down to get the ball back in a one possession game, the Colts pulled out a little tricky and ran a reverse pass. Senior wide receiver Zac “Buc” Offord took the hand off and threw a touchdown pass to fellow senior wide receiver Jaree “3” Turner.

That score gave North Marion a 41-27 lead with 6:23 left in the game and took the air out of Columbia fans in attendance.

The Tigers now wait to see who their next opponent will be when the full playoff brackets are revealed on Sunday. Coming into Friday night, Columbia was a five seed in Region 1-6A. Now with a loss, there is a possibility the Tigers could slide down to the sixth seed. If this was to happen, that could possibly mean a rematch with district rival Robert E. Lee.