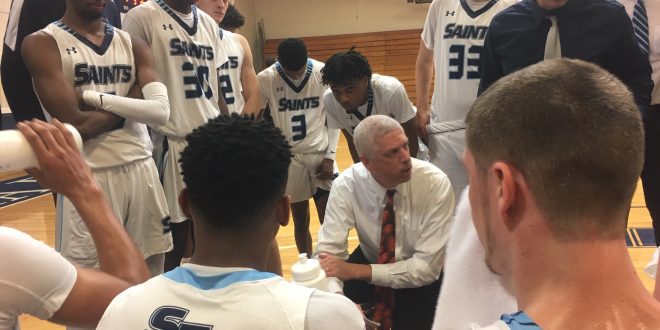 With the clock winding down in the fourth quarter, freshman guard Josiah Tynes corralled a rebound. A fast break ensued. Tynes dished the ball to freshman forward Nikola Jerotic, who rose up for a two-handed slam. The Santa Fe College bench erupted.

The dunk put an exclamation point on Santa Fe College’s 69-54 victory over ASA College Miami in its season opening game at home.

“I don’t know if words can describe it,” Jerotic said. “Especially because it was my first college game.”

Santa Fe led 35-27 at halftime. ASA Miami stormed back in the second half, tying the game at 35.

“The first couple of times I’ve been here to play Santa Fe, they’ve always been tough at home,” said ASA College Miami head coach Jean-Camille Dubuisson II. “The fact that we were in the game and competing down to the end, that lets me know we’ve gotten better as a program overall.”

The Saints promptly rattled off 14 unanswered points. Santa Fe kept a double-digit lead throughout the second half, and only gave up 12 total points in the game’s last 10 minutes.

Despite having a larger lineup, Santa Fe head coach Chris Mowry thought that his team had trouble countering ASA Miami’s aggressive play in the first half.

“I thought we were much better in the second half at responding to their aggression with with our own in a non-combative way,” Mowry said.

Contributions come from top to bottom of Saints’ roster

Since Friday was Santa Fe’s first game of the regular season, the night marked many of the Saints’ players first collegiate game.

We only have two returners from last year,” Mowry said. “This is a brand new team.”

During the game, the Santa Fe rotation remained as fluid as water. Mowry ensured that the entire roster received playing time.

“I think we’re at least two deep at every position,” Mowry said. “I think that can be one of our strengths. Over the course of the game, maybe we’re able to wear down the other team a little bit if they’re only playing eight or nine.”

Jerotic proved to be the biggest contributor for Santa Fe, leading the team with 15 points. Freshman forward Yaw Obeng-Mensah added 11, as did Tynes.

“Yaw got a couple big time rebounds and put-backs in the second half,” Mowry said.

ASA Miami (0-1) faces a quick turnaround on Saturday as the team travels to Hillsborough Community College (1-0) in Tampa.

Santa Fe (1-0) also has Hillsborough Community College next on its schedule, on November 5. The Saints may have freshman center Tre Howard and freshman guard DJ Henderson available. Once the two freshmen return from injury, Mowry must account for the playing time of two additional players.

“That would be a good problem to have,” Mowry said. “I think it’s helped us compete against each other in practice on a regular basis.”

Santa Fe Men’s Basketball team begins its 2021 season this Friday. The Saints had a …