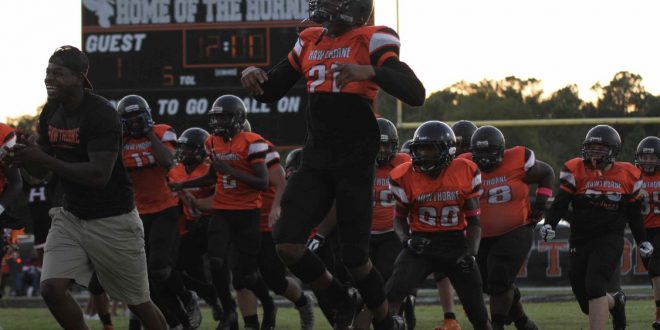 The score was tied 10-10 with 6:19 left in the game. Gadsden County had the ball looking to take the lead. Jaguars running back Johntarrious Thomas took the hand off and went right up the middle untouched on his way to the end zone. The play gave the Jaguars a 17-10 lead, and their defense was able to make the necessary stops to finish off the game with a 17-10 win over Hawthorne.

On Hawthorne’s first possession, the Hornets went on an eight minute touchdown drive to grab the lead 7-0. “We had a good drive going as far as running the football, so we wanted to continue to run the football, and it turned into a touchdown.” said Hawthorne head coach Cornelius Ingram.

Hawthorne starts the game off with an 8 minute touchdown drive. Key’Shaun Williams scores from half a yard out and the Hornets lead the Jaguars 7-0 with 3:54 left in the 1st quarter. @ESPNGainesville @SunPreps @FlaHSFootball @ThePrepZone pic.twitter.com/UMVhKck8Ys

On the other side, Gadsden County’s first possession had a touchdown drive of over eight minutes as well. The drive concluded with a quarterback sneak by Javon Pride, which tied the game up at seven.

Gadsden County answers with a long touchdown drive of their own. Javon Pride takes the quarterback sneak in on 4th and goal to tie the game at 7 with 6:36 left in the first half. @ESPNGainesville @SunPreps @FlaHSFootball @ThePrepZone pic.twitter.com/di6JrLvYJA

Overall, the first half had just four possessions– two by each team. The score was 7-7 at the half thanks to some great plays by the Hornets’ defense. Coach Ingram spoke about the defensive effort, “We played awesome defense. We had guys flying around, playing with confidence,” he said.

The big plays on defense started with the Hornets forcing a crucial turnover as Gadsden County was looking to take a touchdown lead going into halftime.

The Hornets followed that up with an interception late in the third quarter to end a Jaguars drive that reach the edge of the red-zone.

All in all, the defensive effort from the Hornets was there tonight, but it wasn’t enough. Coach Ingram talked about his team’s defense.

“Defense was stellar tonight for us. They stood up for us big, couple goal line stands, and they just broke that one play that put them over the top, and it really broke our backs.”

Coach Ingram was confident this loss would not affect his team’s seeding. The most recent rankings have the Hornets as a two seed in class 1A Region 4. The next closest team to the Hornets in PRI is the Trenton Tigers, but they lost 41-35 to Lafayette. Overall, Coach Ingram was proud of his team for the way they fought, and he still thinks they deserve a bye week and the two seed in their region. The playoff match-ups will be announced by the FHSAA on Sunday morning.

The expectations for the Hornets this year were low. Many people thought, with the loss of over 20 seniors from last year, the team wouldn’t be as good.

“These guys didn’t listen to the negative talk. They just went out and worked since the summer.” In the post-game huddle, Ingram thanked his seniors for, “laying the foundation.”

“They’ve been great role models for our entire school… I couldn’t be more proud of them,” Ingram said.

And the season for them and the team is not over.