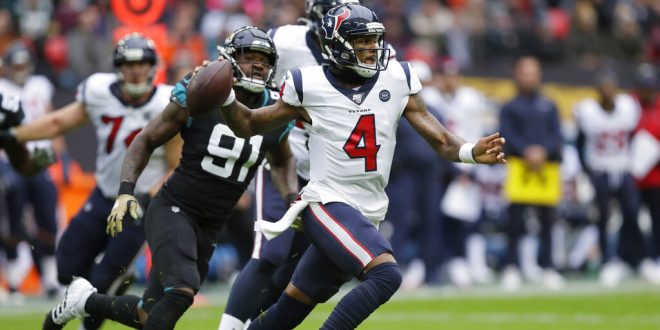 Houston Texans quarterback Deshaun Watson (4) runs out of the pocket under pressure by Jacksonville Jaguars defensive end Yannick Ngakoue (91) during the first half of an NFL football game at Wembley Stadium, Sunday, Nov. 3, 2019, in London. (AP Photo/Kirsty Wigglesworth)

Watson, Texans run away from London with win over Jaguars

The pocket was collapsing. Texans quarterback Deshaun Watson had no time to think, or throw, or breathe. Or so it looked that way.

Like a group of children lagging behind in its first ever game of tag, Watson maneuvered through the Jaguars defensive line. He couldn’t be caught. His head was constantly up, looking for any window he could fit the football in for positive yardage. Anytime it seemed the Jaguars had Watson where they wanted, he’d escape and convert. And he did this again, and again and again Sunday morning in London. Watson and the Texans ran away from the Jacksonville Jaguars 26-3 across the pond.

It continues to amaze people how the third-year star fell to twelfth overall in the 2016 NFL Draft. Watson was selected as the third quarterback taken. He has continuously shown why he can play, and he did it again against the Jaguars. Watson threw for 201 yards on 22 of 28 attempts with two touchdowns and zero interceptions. Watson’s ability to maneuver out of the pocket and keep a play alive was prevalent at Wembley Stadium.

“I think the guy we were playing against, the quarterback, rather than looking at it as, ‘Hey listen, we missed something,’ I look at it as ‘That guy is just unbelievable,'” said Jaguars head coach Doug Marrone following the game. “His fluidity — I don’t know if that’s even the right word — of when he gets hit or when he gets grabbed, and he can move and escape, I don’t — I’ve seen him do it against everyone.”

Whether it was the first and 35 situation in the first quarter or multiple crucial third downs throughout the game, this ‘fluidity’ continues to stagger defenses every week. He now leads NFL quarterbacks in total touchdowns with 23. He’s also thrown for 2,432 yards already this season, to go with just five interceptions. He also became the third quarterback in NFL history to throw at least two touchdowns and convert more than 75 percent of his passes (78.6 percent) in an international NFL game. The Gainesville, Georgia, native joins Tom Brady and Ryan Fitzpatrick on the short list.

On the other side of the field, Jacksonville’s rookie signal caller looked rushed and pressured for most of the game, and it was obvious to most.

Gardner Minshew II struggled against the Texans defense, throwing two interceptions with no scores on 27 of 47 attempts. The quarterback did throw for 309 yards, his third highest total this season, however, he failed to throw a touchdown for just the second time this year. Minshew also doubled his season interception total. Entering the game, he had thrown just two.

Twenty incomplete passes, along with a nonexistent run game (in which the starting quarterback back almost out-gained the starting running back on seven less attempts), concludes to an offense that can only muster three points in a 60-minute match. And Minshew did almost outrun Leonard Fournette. The Louisiana-native only gained 40 yards on 11 carries, while Minshew had 34 yards on 4 attempts.

Previous Tampa Bay Bucs fall in overtime to Seattle Seahawks 40-34.
Next Santa Fe Catcher Caleb Stafford Refuses to Give Up the Game He Loves