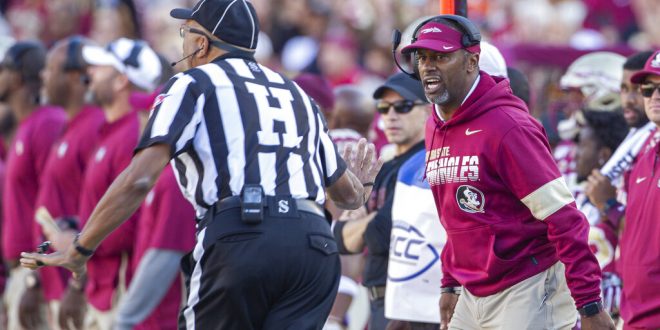 Florida State has announced the termination of football head coach Willie Taggart. FSU athletic director David Coburn announced the decision on Sunday afternoon. The decision was made less than 24 hours after a tough 27-10 loss against the University of Miami.

Coburn said that he spoke to Taggart Sunday afternoon and informed him of the school’s decision. He then informed the coaching staff as well as the athletes.

“I met with the team and coaches immediately after that conversation to let them know of the change. It was very important to us that the student-athletes know right away.”

Taggart later addressed the public via Twitter stating that although he does not agree with the decision, he wishes the best for his now-former team.

With his hiring, FSU and Taggart had agreed to a six-year contract that would compensate Taggart five million dollars per season. After his dismissal, FSU has agreed to pay Taggart 85 percent of his remaining compensation.  He will be receiving monthly payments until the remaining term of the contract.

Willie Taggart’s Career with the Noles

Taggart’s termination comes less than two years after being named FSU’s head coach. Then Athletic Director Stan Wilcox hired Taggart back in December 2017 following Jimbo Fisher’s departure. He went 9-12 with the Noles with a 0-5 record over rivals Miami, Florida and Clemson.

FSU missed a bowl game for the first time in 36 years after ending the 2018 season with a 5-7 record. After a disappointing season, Taggart proceeded to make some adjustments to his offensive staff.

The first game of their 2019 season looked promising after having a 21-6 lead against Boise State. The Noles eventually dropped that game losing 36-31.

After that game, the Noles were known for losing fourth quarter leads after displaying the same performance in their games against Virginia and Wake Forest.

FSU currently has a 4-5 record, including 3-4 in their conference and are at risk of missing a bowl game for the second year in a row.

For the remainder of the season, assistant coach and former FSU player Odell Haggins will have the role of interim head coach. This will be the second time Haggins steps up to this role after doing the same back in 2017 after Fisher’s departure. Haggins finished 2-0 that season and led FSU to wins over LA-Monroe and Southern Mississippi in the Independence Bowl.

Coburn addressed the public about the future of FSU’s football program this afternoon. When asked about his timing, Coburn mentioned that there were no upsides to waiting. He wants to start searching for the next head coach as soon as possible.

When asked about his expectations for the next coach, all he said was that he wants someone who can win a national championship.

“I don’t have an explicit set up criteria other than that. And I’m going to look at every option I can find. But we’re going to win, we’re going to get back to the standard of Florida State University Football.”

Coburn is also confident in Haggins as he said that he did an excellent job last time and expects the same this season.

Florida State has three more games left in the season. They will be traveling to Boston College first and will later host Alabama State for their last home game. Their season will conclude with the annual rivalry game against Florida which will be hosted by the Gators.

Camila is a senior at the University of Florida, who served as a beat writer for the women's basketball team from 2019 until the 2021 season. She was also a beat writer for the Gators football team during the 2020 season. Camila is also WUFT's news director as well as a sports reporter/anchor.
@CamilaMaffuz
Previous Monday Night Football Preview: Cowboys vs. Giants
Next Heat Cruise Over Rockets to a 5-1 Start