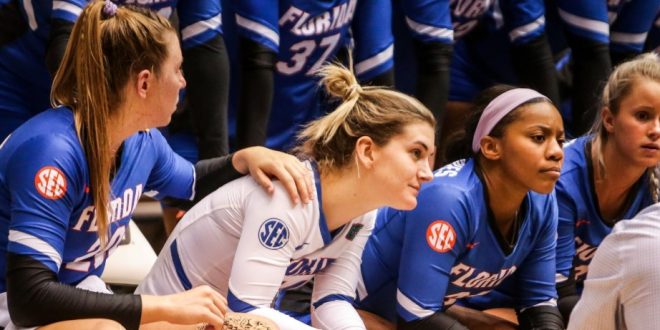 After a week-and-a-half off, Florida Gators volleyball is back in action with a weekend trip to the Magnolia State. The 12-ranked Gators’ first opponent is the Ole Miss Rebels on Friday night.

A win would help Florida maintain its position atop the Southeastern Conference standings as it hunts for another title.

These teams last met in Oxford in 2018 when Florida claimed a 3-1 victory. The Gators are 49-6 all-time against the Rebels and haven’t lost since 1989.

Steve McRoberts’ team started the conference schedule at a torrid pace. The Rebels entered SEC play on an eight-match win streak and proceeded to win their first six conferences matches. Since then, they’ve lost five in a row.

Ole Miss has the fourth-lowest opposing overall hitting percentage in the conference at .194 but teams are hitting .216 during their losing streak and average about .240 over the last three.

Florida might own the league in blocks per set, but Ole Miss’s 214.5 total blocks leads the conference. They also have the most block solos at 59.

Warnell is third in the SEC with a .405 hitting percentage and is hitting .383 against conference opponents. She posted a career-high 16 kills on a .519 efficiency against the Crimson Tide on Sunday.

Meanwhile, Stroup is top 10 in kills per set (3.66) and points per set (4.02). She is the all-time kills leader in the rally scoring era and will most likely have more kills than any player in that era or sideout scoring at over 1,450 kills currently.

Gators keep racking up the weekly awards as Rachael Kramer was recognized as the SEC’s Defensive Player of the Week.

The senior from Phoenix, Arizona recorded five block assists and one block solo on top of her 12 kills in Florida’s five-set win over the Missouri Tigers in Columbia last Wednesday.

She currently sits at seventh all-time with 430 total blocks and her 386 blocks assists are fifth-best.

Florida hasn’t played since that win over Missouri. Let’s see how they’ll be after all this free time.