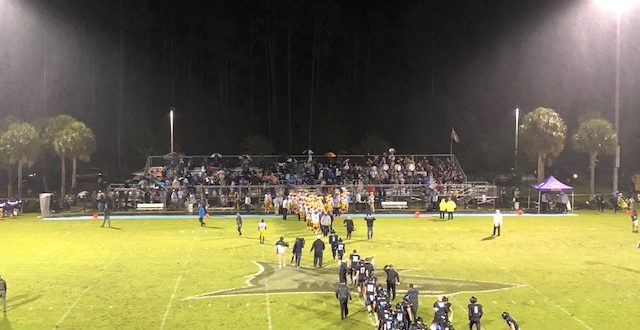 The second half of the season hasn’t been great for Columbia football, dropping three out of four heading into the playoffs. They were eager to put that behind them heading into their first-round matchup against the Ponte Vedra Sharks on Friday night and won a hard-fought defensive battle.

Fast Start for the Tigers

Wet conditions for most of the evening made it hard for either offense to put points on the board. The Tigers’ offense struggled to establish any kind of rhythm early on, thanks in large part to back-to-back penalties on their opening drive.

After a rough start, Columbia was able to find the end zone on its second drive when quarterback Jordan Smith connected with tight end D. J. Bennett to make it 7-0 with 6:59 left in the first quarter.

After three consecutive stops by the Tiger defense, Columbia was able to strike again early in the second quarter when Smith found senior wide receiver Lanadrick Bradley for his second touchdown pass to put the score at 14-0 with 9:15 remaining in the half.

The Tigers looked to possibly put the game out of reach before halftime, but an interception thrown by Smith and a turnover-on-downs kept it at 14-0.

Defense key in tough second half

For the last few weeks, one of the negative storylines surrounding this Columbia football team has been its defense.

The Tigers have struggled mightily to stop the run, an issue which sunk Columbia last week against a North Marion team that ran for over 300 yards on this unit.

Against Ponte Vedra Friday night, the defensive stepped up with one of its best performances of the year when it mattered most.

“I know it’s been a tough couple of weeks, but those guys came in and they fought their behinds off tonight,” head coach Brian Allen said.

The only points allowed by Columbia came after Jordan Smith coughed up a wet football at the Tiger 6 yard-line, and Ponte Vedra capitalized with Campbell Parker’s touchdown run.

On his huge takeaway, Pollock said, “We were in a cover-four, and I actually tried to pass him off to Shyheim (Brown). But Shyheim kind of looked at me, and so I just attacked it.”

Pollock also credited senior leadership for the defense’s dominant performance. “The seniors who usually aren’t vocal spoke up in practice, so that really made a difference.”

With the win over Ponte Vedra, the Tigers will stay on the road next week to face the Robert E. Lee Generals in the Region 1-6A semifinals next week. The district rivals met in the regular season with the Generals winning an overtime thriller, 27-21.

On the opportunity for revenge, Allen said, “I think our guys will be excited this time around – it matters.”

Previous Oak Hall Routs Saint Francis in the First Round of the Class 2A Playoffs, 47-0
Next Hawthorne Football Defeats Wildwood 37-21 in a Rainy Battle to Move on to the Regional Semi-Finals