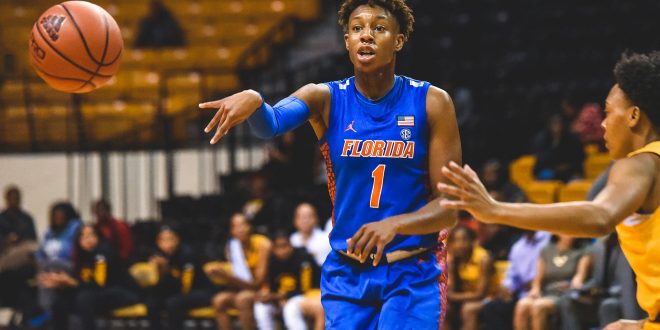 Florida had a strong season opener on the road against Grambling State Tuesday, winning 72-65. The season opener featured great execution by veteran players like Kiki Smith and Zada Williams, as well as the freshman class.

The Gators look to start a winning streak early on the season when they face the Lancers. Tip off for the home opener is set for 3:30 pm at the Exactech Arena.

Florida opened its season with a win on the road against Grambling State, a game that saw 18 lead changes and six ties. The fourth quarter defined the game when the Gators outscored the Tigers 21-13. One notable player in this quarter was red-shirt junior guard Kiki Smith. She scored 16 points, tying for her career high. She also had six assists and nine rebounds during the game.

Another player who reached 16 points was red-shirt senior forward Zada Williams. She later explained that her team’s success comes from the improvement of their on-court chemistry.

Another player that shined on the court was guard Nina Rickards, making her colligate debut. She scored 10 points for Florida.

This season has a promising start in comparison to last seasons’ no-road-win until March. The victory against Grambling State came with 19 assists and 13 steals, exceeding any single game total from last season.

Similar to the exhibition game, the freshmen made their mark on the court. Between Rickards, Lavender Briggs, Brylee Bartram, and Faith Dut, they totaled 25 points. This is the most points freshmen have totaled in a season opener since the 2012 season.

This is the second time the Florida Gators and Longwood Lancers have met. The first time was back during the 2014-15 season, where the Gators swept the Lancers 91-46.

Longwood has distinguished players returning to the court this season. Last season, All Big South forward Dayne Rouse had an average of 14.4 points per game. She was also ranked top 25 nationally in field goal shooting. Junior Mallory Odell and sophomore Akila Smith are also returning after leading the team in rebounds last season.

This is Longwood’s 13th season as a Division 1 and they were picked to finish 10th in the Big South Conference’s preseason poll. The Lancers opened up their season with a 93-53 loss last week against James Madison.