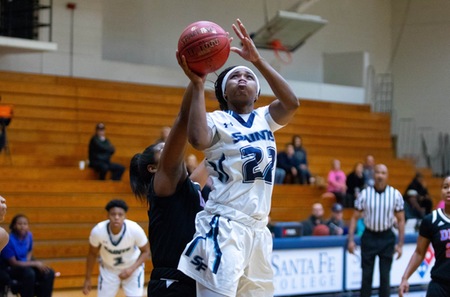 The Santa Fe Saints women’s basketball team will be hosting a Saturday game on November 9 at 2 pm against Indian River State College. The team will be looking to bring its overall record to 2-2 for the 2019-2020 season. Last year, the Saints boasted a strong 20-8 overall record and a Mid-Florida Conference Championship but they return only four players from that team this season.

The new season started with a tough match up with the three-time Georgia Collegiate Athletic Association (GCAA) champion South Georgia Tech on November 1. The Saints fell to the Lady Jets 5-82-55. The following day, the Saints suffered an additional loss against Central Georgia Technical College with a final score of 67-60.

Despite the immediate setback, the Saints were able to pick up a win to boost their confidence against Elite Sports with a final score of 135-52 on November 6. According to head coach Chanda Stebbins, many of the players were able to get into the game and prove themselves. Stebbins said the rebound margin for her team was impressive in the game as well.”

Offensively, Stebbins is looking to improve her player’s three-point shots. In contrast, Stebbins has been pleased with the team’s guard rebounding on the defensive side.

The River At Santa Fe

Indian River State College experienced a tough year last year, going just 3-27. The team has only six returning players and nine freshmen to make up their roster for the 2019-2020 season. Indian River is 1-2 and Saturday’s match up will determine who will be able to balance their record.

Parker Welch is a Senior at the University of Florida majoring in Sports Media at the College of Journalism & Communications.
@parkerrwelch
Previous Women’s Basketball Takes on Longwood for Home Opener
Next Newberry Panthers Prepare for High School Football Playoffs

Ahead of the 2021-22 season, Head Coach Chanda Stebbins joined Sportscenter to talk about the …