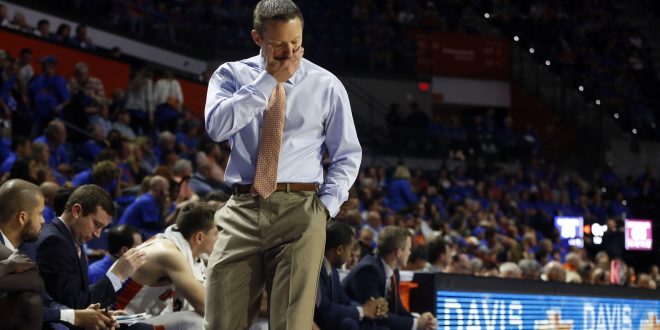 The Gators Men’s Basketball team will aim to rebound on Thursday, Nov. 14 against the Towson Tigers.

After Florida’s loss, the Gators (1-1) dropped nine spots down to 15th.

Against FSU, the Gators could not get the ball to go in the hoop consistently. The team collectively shot 28% from the floor, and only led for four minutes and 50 seconds.

Kerry Blackshear Jr., who is arguably the most versatile player for the Gators, was held to 0 made field goals on Sunday. All 10 of his points came from the free-throw line.

One of the bright spots for Florida in their loss came from in the form of rebounds. The Gators grabbed 39 rebounds to FSU’s 37, with 13 of the Gator’s rebounds coming from Blackshear Jr. He’s averaging 11.5 rebounds per game this season, so look for Mike White to continue to put him in a position to dominate the glass.

Getting KJ the ball with better opportunities to score is a must if the Gators want to show AP voters that they deserve to be in the upper-echelon of teams in the country.

Florida relies heavily on good perimeter shooting from players like Noah Locke and Andrew Nembhard. Those two collectively shot 2-12 from beyond the arc against Florida State. Mike White should adjust to getting his shooters better looks to boost their shot confidence against Towson.

The Gators turned the ball over 16 times against the Seminoles, which turned into 15 points off of turnovers. Something that Coach White emphasized this season is taking care of the ball, so expect the team to work at that as the young season progresses.

Tip-off for Thursday’s game is at 7 p.m. in the O’Connell Center.

TV coverage can be found on ESPN2

Steven Walker is a beat writer for ESPN Gainesville and is currently studying Journalism & Sports Media at the University of Florida.
@swalker_7
Previous Pete Alonso Named NL Rookie of the Year
Next Could David Fizdale’s Time with Knicks be Running Out?