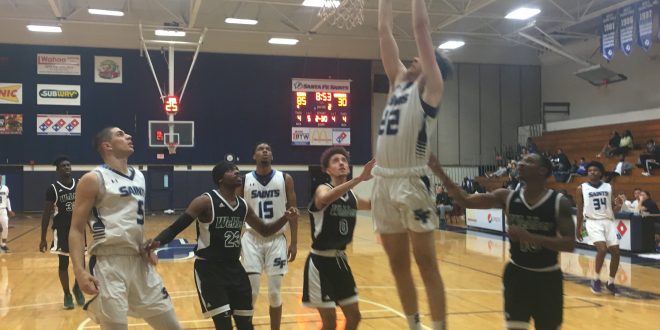 Santa Fe sophomore center Luka Filipovic rises up for the two-handed slam in the second half against Webber on Wednesday, Nov. 13.

With the blink of an eye, the Santa Fe College men’s basketball team found itself with an insurmountable lead. The Saints walloped the Webber International University Warriors’ junior varsity team on Wednesday night, 106-45.

Santa Fe stood firm on defense and dominated the glass, grabbing 35 defensive rebounds in the process. This led to many fast break opportunities.

“Our size really helped us in terms of being able to corral defensive rebounds and then get an outlet and our guys did a good job running the floor,” said Santa Fe head coach Chris Mowry.

Freshman Deante Green and junior Nasir Stewart-Muir led Webber with 14 points apiece. Sophomore Dorian Harmon added 10. Nothing much happened outside of those three players. The Warriors shot a measly 26.2% from the field.

“[Filipovic’s] length and mobility are a big asset,” Mowry said. “Now that Tre [Howard] is back in practice, they have an opportunity to go against each other and start developing and getting better, both inside and on the perimeter.”

Three other players finished with double digits in scoring for the Saints. Webber struggled mightily to match up with Santa Fe.

“We were much bigger inside and were able to obviously throw it in there and score quite a few buckets in the lane and get quite a few offensive rebounds,” Mowry said. “They fought hard, but we were just a much bigger team.”

Webber plays its next game on the road at St. Thomas University on Nov. 23.

Santa Fe (4-1) hosts the State College of Florida Manatees (2-2) on Nov. 16. Mowry hopes that his team will keep up the intensity for Saturday’s game.

“I thought our energy was much better today than yesterday,” Mowry said. “We had a really good stretch of 30 minutes where I thought we really defended with the intensity that we that we need to.”

@NevadaCullen
Previous Is Minnesota the Real Deal?
Next P.K. Yonge Celebrates This Year’s Signees, Including a Future UF Female Swimmer