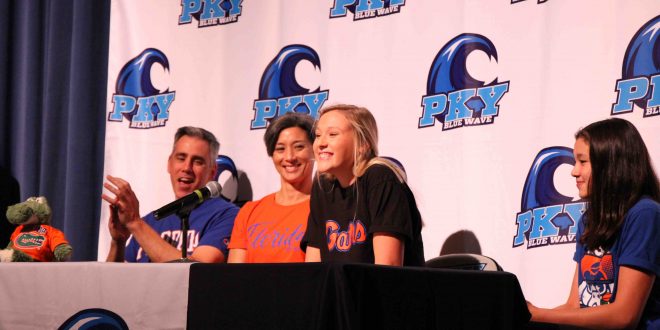 Lain Shahboz smiles to the audience after signing her paperwork.

P.K. Yonge held their signing ceremony for two of their female athletes on Wednesday, November 13.

Lain Shahboz has spent most of her life in a pool. The senior committed to the University of Florida last Spring as a backstroker, but has been a member of the Gator community for several years. Shahboz swims year-round with Gator Swim Club, under the direction of coaches, Robert Pinter and Adam Dajka. “We have seen her develop and as club coaches that’s our job,” Pinter said. “She has been a nice surprise in some respects; to see her turn into such a tremendous swimmer over the past four years.”

“Her hard work ethic and her positive energy [are some of her best qualities she will bring to UF],” Dajka said.

The signee had offers from out of state schools such as Arizona State, Georgia, North Carolina State, and Texas. According to the swimmer though, she knew she belonged at the University of Florida immediately after meeting the coaches and the team. “I loved it [Florida] too much not to go here,” Shahboz said. “I am so excited- obviously that we are number one- and it is super great to see how amazing those girls are doing. I am super proud of my future teammates and I am super excited to become a gator.”

Courtney Moore is a 5-foot-7-inch guard on the verge of scoring her 2000th point this season. The senior helped lead the Blue Wave to the State Semi-Final last season as well as made the Elite AAU Team in Orlando. Moore did not spend the entirety of her high school career at P.K. Yonge though; she was coached by Willie Powers as an eighth-grader before transferring, then returned to play under him as a Sophomore. However, this did not deteriorate her love and passion for playing for the Blue Wave. “She’s a fierce competitor,” Powers said. “She plays to win, plays hard, and never gives up.”

“[My favorite part about coaching her] is her will to win,” Powers said.

The athletic staff at P.K. hopes for Moore’s 2000th point to be scored at a home game. The community hopes for a large celebration to go along with her success and accomplishment. “I hope to still be a team player and keep the rest of my teammates involved,” Moore said. “But I am really excited to achieve this goal with them around me.”

Moore’s commitment to East Tennessee is “something she never thought would happen.” In spite of offers from the University of North Florida and Jacksonville University, the signee admits to knowing she belonged as a Buccaneer as soon as she stepped onto the campus. “I felt welcomed,” Moore said. “I had a host, her name was Erica Hanes Overton, and she just made me feel like I was at home all over again. So, I really fell in love with it. I am mostly excited about starting a new chapter in my life and calling a new team family.”

Rylee is a second year Journalism major with a specialization in Sports and Media at the University of Florida College of Journalism and Communications.
Previous Santa Fe Blows Out Webber at Home
Next Florida Women’s Soccer Team Qualifies for the NCAA Tournament

The Alabama Crimson Tide remarkably secured the No. 1 recruiting class in the nation for …