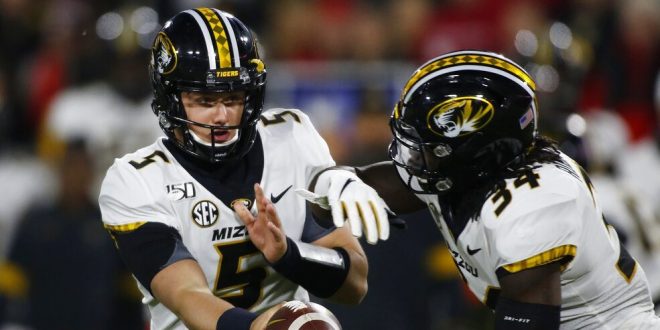 Missouri quarterback Taylor Powell (5) hands the ball off to Missouri running back Larry Rountree III (34) in the first half of an NCAA college football game in Athens, Ga., on Saturday, Nov. 9, 2019. (Joshua L. Jones/Athens Banner-Herald via AP)

Missouri Tigers Back Home for Gators

“Home, sweet home” might be a common phrase for Missouri Tigers football this week. They return to the friendly confines of Faurot Field for the first time in three weeks for a matchup with the Florida Gators.

Missouri was slated to finish third in the SEC East at SEC Media Days. Right now, the Tigers are last in the East at 2-3.

Bennett Durando of the Columbia Missourian said this team was expected to be 7-1 or even 8-0 around this time of the year. It was certainly believed to be the case when Mizzou was 5-1, according to Durando.

A big factor in those expectations was the acquisition of transfer quarterback Kelly Bryant from Clemson. Bryant started Mizzou’s first eight games, but he left the game early in the Kentucky loss and missed the following game against Georgia.

Richards said Bryant is expected to play against Florida and could have even played against the Bulldogs last week.

The Tigers have a seven-game home winning streak dating back to the 2018 season. With five home in 2019, Missouri is 10-2 at home over the last two seasons.

Barry Odom must send different teams to the road games because the splits between home and away are just egregious. Missouri averages 40.4 points at home to just 13 on the road. Additionally, they allowed about 12 points per home game this season as opposed to almost 30 on the road.

Here are some other notable home vs. road averages (Home – Road):

To Howard Richards, the team’s performance is a mystery to him. He said shuffled lineups on the offensive line hurt consistency at the line of scrimmage and on that side of the ball.

Missouri didn’t score fewer than 30 points up until its loss to Vanderbilt. And the point total decreased over the next two weeks.

What happened between Ole Miss and Vandy that made Mizzou’s offense disappear? I’m not sure and neither are the players.https://t.co/MahyI0JPP0

“Offensively, your success whether running the ball or passing starts up front and they have not been as good as they’ve been the past couple years,” Richards said.

Durando on it not becoming “offense vs. defense” in the locker room:

It has been a rough three weeks for the Tigers of Missouri. But an opportunity for a win back in Columbia could get the sour taste out of Missouri’s collective mouth.