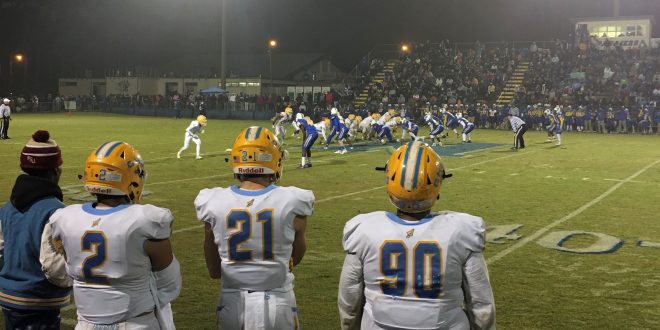 Chiefland players look on as Ty Corbin leads the Indians against the Newberry Panthers in the FHSAA Class 1A Football Playoffs.

The Newberry Panthers were stunned on Friday night by the Chiefland Indians after a 15-point comeback in the fourth quarter.  The Class 1A FHSAA Football State Championship Region 4 top seed was upset by Chiefland at home 20-19 despite entering the fourth quarter leading 19-6.

Maybe it was the weather, which dipped into the 40s in Newberry, or maybe it was the nerves, something that Newberry players were full of after going 1-9 a year ago.

Newberry, who averaged 30.6 points in their 10 regular season games that featured two 1-0 forfeit wins, put up less than 20 points for the first time since a season-opening 22-7 loss at the hands of Santa Fe High School.

“We were out coached, outplayed and out-hustled,” first-year head coach Edward Johnson said about his team’s performance.

Or, maybe, it was the play of Chiefland  quarterback Ty Corbin. He didn’t necessarily become the greatest QB to play the game, but he was able to pick apart the Newberry defense well enough in the air and especially on the ground to win.

Perhaps nothing epitomizes this more than his 50-yard touchdown run that would provide the Indians the lead with eight minutes to go in the game. This score, and the ensuing two-point conversion, provided a lead that would never be relinquished.

The Indians have 15 unanswered points and a 20-19 lead! Chiefland QB Ty Corbin runs the ball up the middle for the score, and then catches the 2-point conversion to give the Indians their first lead of the game with 8 minutes remaining. @ESPNGainesville pic.twitter.com/m9J6u6PQnj

Coach Johnson recognized the season by his team. A season in which their win total rose by eight games compared to 2018.

“You guys had an incredible season,” Johnson said to his players, “you won’t recognize that for a couple months until after this all settles.”

Newberry had looked like a playoff team that could win with their offense or defense for much of the season. However, the defense could not figure out how to stop the various run plays drawn up by head coach John Palmer and the Chiefland coaching staff.

Similarly, the Panthers offense struggled to get much going in the air or on the ground.

Newberry QB Makai Johnson threw a touchdown pass and QB Jaylen Zullo punched one into the end zone, but both of these came off of turnovers that set the Panthers up in Chiefland territory. The third of Newberry’s three touchdowns was a kick return that succeeded a Chiefland touchdown in the third quarter.

The defense gave Newberry eight seconds at the end of the game to throw a Hail Mary but senior QB Jaylen Zullo’s pass was intercepted by the Indians as time expired.

The Indians have shocked the Panthers in Newberry! The No. 1 seed in the division falls 20-19 at home after going 9-1 in the regular season. The Chiefland Indians move on. @ESPNGainesville pic.twitter.com/sATz8ttgmt

It was a somber mood when Coach Johnson told his team that on Monday they would have a quick meeting and they would return their equipment. Now that the Panthers are eliminated, they will reconvene in January to start early preparations on redemption to this tough loss.

As for Chiefland, there was nothing but celebration as their fans walked onto the field to celebrate with the victors. How could you blame them? The Panthers were undoubtedly the favorites and both sides knew it.

The team knows their season could be far from over, however. In the short run, the Indians (8-4) now have the privilege of traveling to Pahokee to take on the Blue Devils (5-5) who have played a daunting schedule. Pahokee comes into the Regional Championship after beating Hawthorne 28-14 on Friday night.

The winner of this game moves into the final four of the 2019 FHSAA Class 1A Football Playoffs, which will be hosted at Gene Cox Stadium in Tallahassee.

Originally from Seminole in the Tampa Bay area, Kyle is a contributor for ESPN Gainesville as well as local NPR and PBS affiliate WUFT. Kyle wants to get into sports with a lofty dream of being a sports broadcaster. He was raised playing soccer and baseball while watching hockey and football, so the knowledge about various sports is fairly extensive.
@KyleFanslerUF
Previous Zach Auger Scores a Hat Trick in Baker County’s 4-1 Win Over Saint Francis
Next Gators lose on the road to Huskies