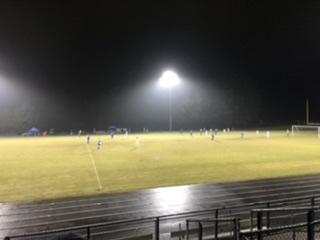 Nine minutes into the first half, Baker County hopped out to an early 1-0 lead. Zach Auger scored his first goal of the night off a perfect pass from senior striker, Chad Anger.

Just three minutes later, Auger nearly netted his second goal of the night on a breakaway, but Saint Francis goalkeeper, Ivan Landeata, made a nice read on the play by cutting off the ball to prevent a shot on goal. Saint Francis got their first offensive chance about halfway into the half when Lucas Duarte drew a foul call. His free-kick attempt from roughly 40 yards out was an impressive one. If it weren’t for Josh Dialo’s jumping save, Duarte would have had the Wolves on the board.

Shortly after, Baker County’s attack continued to get quality scoring chances. Zach Auger nearly scored once again, this time striking the crossbar from about 30 yards out. The game was fairly clean until Baker County’s Chad Anger got a yellow card for an aggressive slide tackle. A few moments later, Ivan Landeata received a yellow card, resulting in a penalty kick for Zach Auger. Auger aimed his shot at the bottom right corner, sneaking the ball just past Landeata’s outstretched arms.

Baker County wasted no time coming out of the half. A few minutes into the half, senior midfielder, Ben Platz, had a breakaway opportunity but missed the goal wide right. The Wildcats relentless offense continued to generate scoring chances, but they failed to capitalize on Saint Francis’ turnovers. Zach Auger came inches from a hat trick, but the referee ruled him offside.

The save of the game came a few minutes later when Saint Francis keeper, Ivan Landeata, denied Baker County’s Nathan Wilson on a beautiful shot from just outside the penalty box that had top right corner written all over it. As the clock dwindled down, Saint Francis began to feel a sense of urgency to break the shutout and cut the lead to 1.

With 12 minutes remaining, the Wolves did just that when Julian Romano scored a rebound goal. Saint Francis’ comeback hopes were soon thereafter diminished, however, when Chad Anger’s goal expanded the Wildcats’ lead to 3-1. With 7 minutes to go, Baker County put the nail in the coffin when Zach Auger completed his hat trick on a free-kick.

He lofted the ball perfectly over the wall of Saint Francis defenders and past the goalkeeper to give the Wildcats a 4-1 lead.

Saint Francis failed to find the back of the net for the remainder of the game, and Baker County came out victorious.

Saint Francis (2-1) will aim to bounce back on Wednesday at home against Newberry. As for Baker County (2-0), they look to extend their winning streak on the road this Tuesday against Baldwin.

Hi, my name is Griffin Foll and I am currently a senior at UF studying sports media journalism with a concentration in political science. I contribute weekly web and radio content for WRUF ESPN Gainesville and help cover the World Cup/Champions League soccer beat. Be sure to check out some of my recent articles!
Previous Game Preview: Gators face first road test in Connecticut
Next Chiefland Football Ends Newberry’s Season in Dramatic Comeback 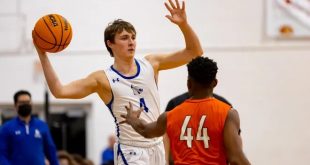