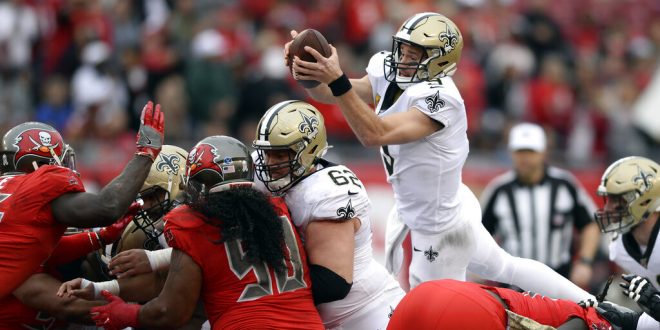 New Orleans Saints quarterback Drew Brees (9) dives over the line for a first down during the second half of an NFL football game against the Tampa Bay Buccaneers Sunday, Nov. 17, 2019, in Tampa, Fla. (AP Photo/Jason Behnken)

After suffering a bad divisional loss the previous Sunday to the Falcons, the Saints looked to recover against Tampa Bay. Drew Brees was playing his third game back from injury and appeared to be back to full strength.

To start Sunday’s matchup, the Saints came out in the first half dominating the Bucs. Kicker Will Lutz made two field goals in the first quarter to give the Saints an early 6-0 lead. Brees then capitalized on a Winston interception with a 16-yard touchdown pass to Michael Thomas for the 13-0 New Orleans lead.

In the loss, Jameis Winston struggled at quarterback throwing for 313 yards, two touchdowns, and four interceptions. Despite bringing Tampa Bay within ten points of New Orleans, Winston threw two interceptions back-to-back drives late in the fourth quarter to seal the Saints’ victory. Winston now leads the NFL in interceptions with 18, six more interceptions than the next quarterback on the leaderboard.

Following the victory, the Saints move to 8-2 overall on the season and first place in the NFC South. New Orleans has a three-game advantage over the second-place Panthers, who are sitting at 5-5 on the season. Green Bay currently is tied with the Saints for the best record in NFC and home-field advantage for the playoffs. Saints will prepare for another divisional matchup next week against the Panthers.

With the loss, the Bucs fall to 3-7 overall on the season and are tied with Falcons for last in the NFC South. Tampa Bay will now prepare to head to Atlanta next Sunday to take on Matt Ryan and the Falcons.