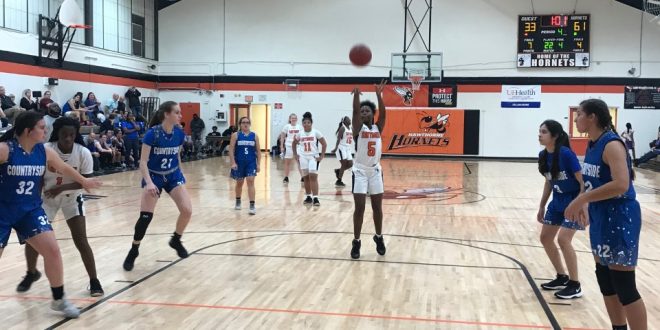 Defense was the story Tuesday night for the Hawthorne Hornets in the girl’s basketball season opener.

The Hornets started the game with tenacious defense. On the first three Countryside Christian possessions, Hawthorne forced three turnovers. The Hornets kept the pressure on for the rest of the first quarter, allowing only eight points. “I do believe our kids stepped up to the challenge. They wanted to be aggressive, and play man to man, and I think we did a good job of that,” said Head Coach Cornelius Ingram.

Antania Mason with the steal and the lay up. Hornets defense looking good early. They lead Countyside Christian 8-3 in the first quarter. @ESPNGainesville @SunPreps @ThePrepZone pic.twitter.com/Yjpp02xSP2

After a bit of a slow start to the first quarter, the Hornets finished the quarter on a 17-5 run to take a 21-8 lead. Jayla Williams led the scoring for the Hornets tonight, scoring 22 points. Kentavia Hagins was second on the team with 17 points, including three 3-pointers in the first half.

The Hornets lead 40-13 at halftime and went on to win 64-35. Jayla Williams and Kentavia Hagins each had 8 second-half points to close the game.

Ingram spoke about what he thinks his team will be this year, “We basically got our entire team back from last year returning, and most of them have played a lot of basketball… I feel good about this team.” The Hornets are coming off a trip to Lakeland last year and will look to build off that, and compete for a state championship yet again this season.

@AnschultzChase
Previous Browns moving forward in absence of Myles Garrett
Next High School Soccer: Santa Fe’s offensive attacks proved too much for Eastside in a 3-1 victory